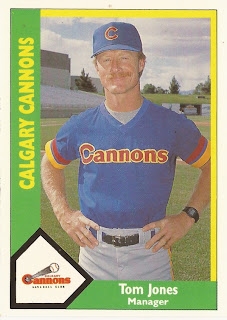 New Memphis Chick Bo Jackson started off slow in 1986. The star fourth-round selection by the Royals started off 4 for 42 in his first 11 games, for a sub-.100 average.

His manager at Memphis, though, had confidence in the young Jackson. Jackson just needed experience, manager Tommy Jones told The Memphis Commercial-Appeal that July.

"He's going to play nine innings of every single game and get his four or five at-bats," Jones told The Commercial-Appeal. "I don't want to rob him of any experience he's getting right now."

Jackson ended up getting his average up. In 53 games, he hit .277. And, by September, Jackson was in Kansas City.

In the end, though, it was Jones who was robbed, robbed by cancer.

Jones went on to manage in AAA, serve as the Diamondbacks' original director of player development and even as a major league first base coach for a time.

Jones' career in baseball began as a player in college and independent ball. He played at the University of the Pacific from 1975 to 1977 and was co-MVP his senior year. During that run, Jones is credited with playing at independent Grays Harbor in 1976 and then independent Beeville in 1977.

In 1979, Jones, sometimes referred to simply as Tom Jones, signed on with the Padres, serving as a player-coach at Walla Walla. He even made the major league staff that September.

He moved to the Giants in 1980, serving as a player-coach at single-A Clinton, he then hit AAA Phoenix in 1981.

His first managerial job came in 1982, with the Royals at rookie Butte. By 1985, he was managing at AA Memphis, staying there for 1986. For 1987, he moved to the Eastern League, heading AA Albany-Colonie for the Yankees.

In July 1987, Jones' Yankees dropped a game to the first-place Pittsfield Cubs. Costing them the game, Jones told The Schenectady Gazette, was mistakes.

"You can't make mistakes like dropping fly balls and still expect to compete with a team like this," Jones told The Gazette. "We're not executing the way we have to against a first-place club. Even a casual fan can can figure out that this is a very good baseball team."

Jones went on to manage in the Mariners, Brewers and Cubs systems. In 1990, he managed AAA Calgary.

By 1998, Jones had signed on with the new Diamondbacks franchise, becoming the team's director of player development from then until 2004. In 2004, he spent time as Diamondbacks' first-base coach.

It was in 2007 that he was diagnosed with brain cancer. He passed away in January 2009, leaving behind two children.

Among those remembering him after his passing was Don Mazilli, who coached Jones way back in American Legion ball in Jones' native Stockton, Ca.