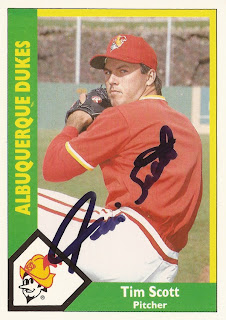 Tim Scott's first look at the majors was brief. He got into just two games for the Padres in 1991, with one total inning of work, before being sent back down to AAA.

For Scott, though, that taste wasn't enough.

"Just getting that little taste that first time around was nice," Scott recalled recently to The Greatest 21 Days, "I was like 'I belonged up here.'"

"When I got sent back down," Scott added, "there was just that much more desire to get back up there."

Scott did get back up, but not until the next season. In all, Scott ended up getting more than that taste, getting time in seven big league seasons and becoming an integral part of the 1994 Montreal Expos bullpen, helping the team to the best record in baseball.

Scott spoke with The Greatest 21 Days in late July at Chukchansi Park in Fresno, Scott traveling to the game with his wife Niki from their hometown of Hanford.

Scott made the Padres in 1991 in his eighth professional season, having originally signed with the Dodgers as a 17-year-old out of high school. His playing days over, Scott has gone on to coach his son Preston Scott in high school ball, winning two division valley championships, and seeing Preston off to Fresno State this fall.
Scott recalled that first call to the majors in June 1991 coming after batting practice. His pitching coach ushered him into the manager's office. The message in the manager's office: Scott was headed for San Diego.

"I kind of stood there for a second," Scott recalled. "The emotions start, your mind starts spinning."

Scott's spun right to how he was going to get to San Diego. The team was home in Las Vegas, so that part ended up not being that difficult.

Another part of it also wasn't difficult. Scott had pitched well enough the first half of the year to make the AAA All-Star team. With the call up, Scott would have to miss the game.

"I was like, 'that's fine with me, I'll forgo that All-Star game to go to the big leagues anytime,'" Scott recalled.

After his two big league appearances, Scott spent the rest of that season back at Las Vegas. He also started the next year there, too. By May 1992, though, he was back in the majors to stay. He got into 34 games for the Padres that year and 56 the next between San Diego and Montreal.

He was getting regular playing time, but Scott said he never really got comfortable, if he could call it that, until a couple years into his Expos run.

"You always have that fear that there's always somebody trying to take your spot, so you can't get too relaxed," Scott said. "They always say it's easy to make it to the big leagues, it's hard to stay."

The next year, though, had to have been his best. It also turned out to be the Expos best. Scott got into 40 total games during that strike-shortened season. His ERA in those outings dipped below 3, at 2.70.

"You always sit back and say 'what if?'" Scott said. "In my mind, we had the best team in baseball that year. A lot of people projected us and the Yankees going to the World Series that year.

"It was very disappointing for me, because it was really the only time in the big leagues to get to the playoffs."

The strike over, Scott returned to the Expos for 1995 and into 1996. He also got into more than 60 games each year. In July 1996, Scott arrived with the Giants in another trade. He also started developing shoulder problems.

"I tried to push through it because it was nice being kind of close to home again," Scott said. But he ended up pitching poorly. He also had just one season left in the majors. In 1997, he divided 17 outings between the Padres and the Rockies and his major league career was done.

Helped by surgery on his arm, though, Scott continued pitching in the minors and independent ball into 2002. He then returned home to Hanford. He and his wife Niki will celebrate their 20th anniversary in November.

For a while there, Scott recalled that it was tough being away from the game. "I couldn't hardly watch a ballgame without getting mad about something," Scott recalled.

But he has returned to the game, at least on the side. He spent the last four as head coach of the Hanford High School baseball team, helping coach his son and the other Hanford players to two division championships.

Scott recalled a couple parents approaching him about applying for the job. He also wasn't sure how it would work between his new day job and coaching. His day job is as a corrections officer at California's Corcoran State Prison.

"It turned out well," Scott said. "I got to spend all that extra time with my son, make sure he had proper coaching and won a couple championships. So it turned out good."

Scott stepped down from the high school spot with his son's graduation. Preston Scott is now going on to Fresno State to play infield, and, hopefully get a shot at pro ball like his father. "He can hit, he can swing," the father said of his son. "He's going to be alright."

Now out of the game again, Scott said he has thoughts of getting back in, this time to the pros. Once his son gets settled in college, the 45-year-old said he might look into coaching, or even being a scout. "I miss being out there," Scott said.