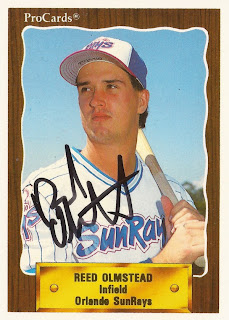 It was June 1990 and the future Minnesota Twins manager was about to make one of his AA future Twins a major league current Twin.

"He got called up to the Twins from our locker room," Olmstead recalled. "So that kind of sunk in - it's close, it's that close."

While Erickson was in his second pro season, making the Twins. Olmstead was in his fifth pro season, getting his first look at AA. And, while he had some success that year at Orlando, Olmstead never did get that call himself.

Olmstead covered his origins in the game, his selection out of high school in the second round of the draft and then his six seasons in affiliated ball as a position player. He also spoke of his return to the game years later, trying his hand at pitching, and even coming back late in his career to after Tommy John surgery, rehabbing on his own.

Along the way, Olmstead dealt with the failures that come with the professional game, and the important lessons that came along with them. For Olmstead, it was the lesson of confidence, keeping it up in the face of failure. It's a lesson he is now trying to pass along to his children.

Growing up in Pasadena, Olmstead recalled just loving the game. As a boy, he recalled he couldn't wait until he turned 8. That was the age he'd get to join organized ball.

As a Southern California kid, Olmstead also couldn't wait to watch the Dodger games, a past time he still enjoys. He spoke with that afternoon's Dodgers-Giants game playing out on his television.

Once he joined a team, Olmstead recalled quickly having success, from making the All-Star team at 10. In ninth grade, he made the junior varsity team.

By 11th grade, Olmstead began to get noticed, both for his hitting abilities and his pitching.
His senior year at Blair High School, Olmstead hit over .500 at the plate and posted a 1.16 ERA on the mound.
The scouts also started showing up. Olmstead recalled a bird dog scout by the name of Ray Moore spotting him and taking him under his wing, introducing him to the area Cardinals scouting team.

As draft day approached, Olmstead recalled multiple teams calling him, asking him where he would play. Would he pitch? Play first base?

"My heart was in playing first base at that time," Olmstead recalled. "I wanted to play every day."

Years later, though, given how his career turned out, Olmstead wondered if he wouldn't have been better off as a pitcher.

But it was as a first baseman that the Cardinals drafted him as. They also thought enough of his skills to take him in the second round of the 1986 draft, 58th overall. It was an achievement, but Olmstead recalled it never really sinking in, not like it would today with near constant coverage of anyone remotely a prospect.

"I remember when I was in high school, you got one line in the local newspaper that day, you cut that sucker out and you put it in the scrapbook," Olmstead recalled. "Now you go on Web sites, Google or whatever, and Google a kid that's never going to get drafted and there's like 15 articles about him."

The other choice Olmstead had to make was whether to go pro at all. For Olmstead, though, it wasn't much of a choice. His mindset all along was to go pro.

School didn't interest him, baseball was his interest.

"Put it this way, the scout that drafted me signed me and the negotiations lasted like five minutes," Olmstead said. "It wasn't anything that was going to drag on. That's what I wanted to do."

Olmstead also got a look at what the pro game was about. And how difficult it actually was, the winning streak notwithstanding.

He was still just 17, facing pitchers with college experience and the best young players from Latin America. He hit a respectable .255, but it was the failure that he couldn't get past.

"That was one of my big issues, keeping that confidence up," Olmstead recalled.

In pro ball, Olmstead said, it's easy to go 0 for 20 in a matter of a few games. He recalled one major leaguer going going on a similar cold streak earlier this year.

"That's what separates guys like me sitting in this back yard and guys like them on TV," Olmstead said. "They've got confidence. They knew that it was just a bad time and things were going to get better.

"When I had a slump, I started doubting my abilities."

Note: This was the last of 10 interviews picked up on The Greatest 21 Days' late July 2012 trip to central and southern California.
Posted by Steve78 at 11:09 PM