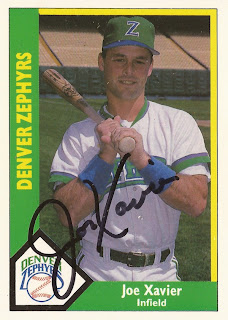 FOWLER, CA - When Joe Xavier was a boy, he had something other kids didn't: An uncle in the major leagues.

For Xavier, it seemed normal. It was also his first introduction into baseball.

"To see that right off, you don't know any better, Major League Baseball, was quite something," Xavier recalled to The Greatest 21 Days recently. "So that was my introduction. After that, that was pretty much my first love."

Xavier went from there to make his own bid at the majors, to follow in the footsteps of his uncle, Bobby Cox. Xavier, though, would never make the bigs, playing six seasons as a pro, but never making it past AAA.

Xavier met up with The Greatest 21 Days in late July with his wife Patti at a Starbucks in Fowler, Ca., near his hometown of Selma.

He also touched on the interest in his career that came from Baseball America, interest that came not so much from his performance on the field, but for the historical implications of his name: Had Xavier made the majors, he would have been the first player in the long annals of the game with a surname beginning with the letter "X."

Xavier grew up outside Fresno, attending school in the small town of Selma, Ca. It was in school there, actually, that he met his wife Patti, and where the two now reside. Two of their three children are now off to college, the third one is about to go.

On the field, Xavier worked his way up the youth baseball ladder, going from T-ball to Little League to Babe Ruth. "I think it was just something that I kept working at, progressed at," Xavier said of playing and learning the game.

As he progressed into high school and early on into college, Xavier started thinking he might be good enough to go pro.

By then, too, Xavier's uncle Bobby Cox was back in the majors, as a manager. He recalled getting to go to Los Angeles or to Oakland to see Cox in action. Xavier recalled meeting up with him in the clubhouse and sitting in the stands.

"I think at that point is where I got a lot more information from him," Xavier said, "a little physical, fundamentals a little bit. But mostly it was talking baseball strategies, just the game itself."

For college, Xavier stayed near home, heading a few miles north to Cal-State Fresno. At Fresno, where Xavier went on scholarship, Xavier recalled learning to work within a team, less as an individual. That compared to later, in the minor leagues, where Xavier recalled winning not necessarily being the goal.

To get to the pros, though, there were the scouts. Xavier recalled anyone showing any potential would eventually have a scout looking. And the scouts keep looking through college, and even into the pros. Soon, Xavier said, they fade into the background.

"You realize you're being watch every day from different teams and you're being scouted all the time," Xavier said. "It comes to be second nature and you don't even worry about it anymore."

In college, though, the scouts looked at Xavier, and there was some interest, but it wasn't until his senior year that he was taken.

Xavier recalled being disappointed after his junior campaign. He'd talked to some teams, but no one took him.

"For whatever reason, it didn't work out," Xavier recalled of not being taken after his junior year, "so I was just happy to be drafted as a senior.

"To be honest with you, I didn't care where I went, just as long as I went somewhere."

Where Xavier went was to the Oakland system, taken by the Athletics in the 13th round of the 1985 draft.

Also, he recalled, the game got quicker.
"Each year there was a transition," Xavier recalled, "the game getting faster, the pitching getting better. But that first year it was more playing every day. Even though you play a lot in college, you're not playing every day, which is a big deal."

Maybe the wooden bat played in to his first plate appearance as a pro. Xavier said he still remembers it, Xavier's Pocatello Gems were playing at Salt Lake City in the rookie Pioneer League. Xavier stepped up to the plate, and quickly grounded out to short.

"The atmosphere all that first year in professional baseball, even though it was rookie ball, it was exciting," Xavier recalled.

One thing Xavier remembered about Pocatello was the kids. The ballpark was small and the kids ran after baseballs, asked for broken bats. The crowds were also light, making both youthful tasks easier.

At least one of those Pocatello kids remembered Xavier, recalling fighting with other kids his age for the ball.

Posting on Xavier's original Greatest 21 Days feature, the man recalled Xavier signing the ball he'd hit, a ball the poster still has. "On my shelf today, I have my Joe Xavier autographed ball — and two broken Pocatello Gems bats — reminding me of what real baseball is," the poster, identifying himself as Adam Reynolds, wrote.

Also at Pocatello, in that first year in pro ball, Xavier recalled the game becoming more scientific. The fundamentals were there, skills that, if taught properly as a youngster, don't change much.

"But," Xavier said, "the game itself becomes so much more involved, everything that goes on around you. That's the big difference."

It happens in high school and college, but it's more precise in the pros, Xavier said.

"In professional baseball, now you're playing for a living," Xavier said. "You're getting paid to win games, so everything comes into play. And I love that. That's really the beauty of baseball. It's the game within the game."

Xavier said he doesn't understand the people who find baseball boring. The game he learned is an involved game.

"There's so much going on between each pitch," Xavier said. "That's what you learn in professional baseball. That, to me, is very intriging, very exciting. And to understand that, no matter how long you played the game, there was always something new, something you could learn.

"Whenever you got to the point, like 'hitting, I have it down,' then you figure out that you don't."

Note: This is the eighth of 10 interviews picked up on The Greatest 21 Days' late July trip to central and southern California. Links to other interviews are on the righthand column.