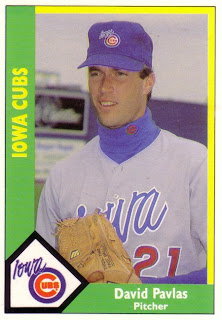 Called on to get the final out - and save - Dave Pavlas gave up a single to load the bases in this August 1996 game against the Athletics, The Hartford Courant wrote.

Then, facing Oakland's Jason Giambi, Pavlas threw three pitches for three strikes, setting Giambi down and picking up his first-career save.

"It seemed like there were a million fans," Pavlas told The Courant afterward. "It felt like I better get him out or I would have to check my car on the way out. That's a load off my mind. I was so excited afterwards I couldn't remember my name or where my locker was. I want to keep that feeling."

It was a feeling for Pavlas that was likely similar to the feeling six years earlier, when he picked up his first major league win, an accomplishment, Pavlas told The Chicago Tribune, that ranked "right up there with being born."

It was also a feeling that was likely a world away from the one he'd felt just a year earlier, in 1995, getting called back to the majors for the first time in four seasons. That was also his first time back since he played that spring, in replacement ball.

Pavlas' career began in 1984, signed by the Cubs as an amateur free agent out of Rice University in Texas.

He played his first game in 1985, for single-A Peoria, going 8-3 in 15 starts. Pavlas made AA Pittsfield in 1987, before being traded mid-year to the Rangers and sent to AA Tulsa.

For 1990, Pavlas returned to the Cubs. He also made the majors. Pavlas was called up to Chicago in late-August. He then got into 13 games in relief, picking up two wins. He picked up that first win Sept. 8, going two scoreless innings.

Pavlas returned to the Cubs for 1991, but got into just a single game with Chicago. In one inning July 26, Pavlas gave up two earned runs.

Then came three full seasons away from the majors. He played back at Iowa. He played in Mexico, Taiwan and Italy. Then, he returned to affiliated ball spring 1995, as a replacement Yankee.

Pavlas made it back to the majors by July, with the Yankees, but his reception was cold, according to The Victoria Advocate.

"This was going to be a last-ditch effort," Pavlas told The Advocate of him playing that spring. "The circumstances couldn't have been any better even though I knew I was going to tick people off. I knew if I went to minor league camp, I wasn't going to impress anybody."

Pavlas got into four games that year for the Yankees, then returned for 16 more regular season games for the 1996 World Champion Yankees, ending his major league career. He continued on in the minors, though, through 2001, even playing a season in Japan for the Yomiuri Giants, but he never got called back to the bigs.

At the close of his pro career, in February 2002, Pavlas recounted his early expectations to The Advocate, the ones he had after being first signed by the Cubs as a free agent back in 1984.