Thoughts on C.J. Cron, Confirmed Everything

Note: This is another installment from The Greatest 21 Days' late July trip through central and southern California. 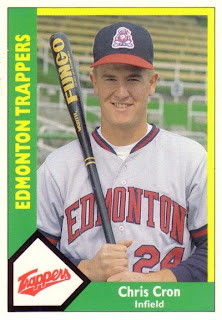 Inland Empire first baseman C.J. Cron had been quiet to this point in the game. He was actually 0 for 4, but had hit a couple balls for deep outs. Still, they were outs.

But now, with the game extending to the 11th tied at six, Cron came to bat again. This time, the bases were loaded, one out. What Cron and the 66ers needed was a hit. Any hit. Or maybe one of those long fly balls from earlier.

It was July 25 and The Greatest 21 Days was visiting Inland Empire's San Manuel Stadium, for interviews with the 66ers manager Bill Haselman and hitting coach Paul Sorrento.

Both Haselman and Sorrento were in the CMC set this site has been featuring. Haselman was with AA Tulsa for 1990; Sorrento with AAA Portland.

But there was another connection to the CMC set there in San Bernardino. It was Cron. Cron's father Chris Cron was in the set as a member of the AAA Edmonton Trappers. (When the elder Cron's photo was snapped in his Trappers uniform for the CMC set, Cron was still a new father, C.J. hardly four months old.)

Cron's father made the majors twice, for six games apiece, in 1991 and 1992 with the Angels and White Sox. It was part of a professional career that spanned more than a decade. The father remains in baseball, serving for 2012 as manager at AA Erie. (Cron's research feature)

Going into July 25th's contest against Rancho Cucamonga, Cron was hitting about .291, with 17 home runs to his credit.

It was a showing that had both his manager and hitting coach speaking well of him before the game.

Sorrento actually knows Cron's father, having played with him at single-A Palm Springs back in 1988.

Sorrento credited Cron's father in helping prepare C.J. for life in the pros.

"I think that's a real big plus for C.J., his dad," Sorrento said. "I know he leans on his dad a lot, so that's really nice, so his dad can kind of give him some real good advice."

Inland Empire manager Haselman also had praise for the 22-year-old product of the University of Utah, calling him "really talented."

"He has a lot of upside potential, hits the ball like a big league player," Haselman said of Cron. "The ball comes off his bat really well. He's improved a ton this year hitting, from the beginning of the year. Just a really solid hitter."

Sorrento concurred with the improvement. The hitting coach said Cron has had a tremendous year, but it hasn't come easy for him.

Sorrento's watched as Cron put in his work to see that improvement.

Fast forward to the bottom of the 11th.

As if on cue, Cron backed up everything his manager and hitting coach said about him.

On a 1-1 pitch from the Quakes' Eammon Portice, Cron hit another long fly. This one cleared the fence with plenty to spare, for a walk-off grand slam.