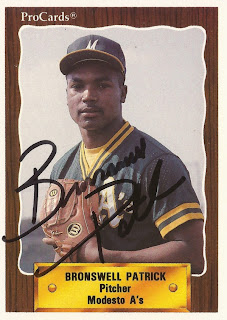 Called into the manager's office in May 1998, Bronswell Patrick received the news he'd been waiting a decade for.

When he heard it, that he was going to the majors, Patrick recalled recently, he cried.

"I sat there in the office and cried when I got the news."

Then came the task of getting back to work. For almost the rest of that season, Patrick's work was done in the majors.

Patrick spoke to The Greatest 21 Days before a late-July game at The Diamond in Lake Elsinore, Ca., home of the Lake Elsinore Storm. Patrick serves for 2012 as pitching coach Storm, passing on the lessons he in his years as a player, to young Padres prospects.

Getting to that point where he learned of his call up involved 10 seasons in the minors. The year he made his debut marked his 11th season as a pro.

He stayed with the Athletics through 1994, then moved to the Astros system for another three seasons all spent at AAA. For Patrick, it ended up being a search for the team that would give him the best chance at making the majors.

Keeping him going, he credited his family, especially his mother Jenne.

The team that finally gave him the opportunity was the Brewers. It then ended up being a brawl that got him his debut.


In the bottom of the fifth of the May 18 game at Colorado, an errant Jeff Juden pitch led to the fight and Juden ultimately being tossed. The Brewers down 7-5, it was Patrick Milwaukee manager Phil Garner called upon to take over.

"Jeff Juden got tossed and the next thing I know, Phil was telling me I was in the ballgame and I was like, 'wow,'" Patrick recalled. "Once I got that first out, I kind of settled down a little bit. I had to calm myself down.

But Patrick also recalled feeling like he belonged there.

"I didn't feel like I was over-matched," Patrick said. "I felt like I belonged there and I didn't get intimidated. It was just a great feeling getting the opportunity to get there and be able to pitch at Coors Field for the first time and keep the team in the ballgame."

Patrick ended up going 3.1 innings, giving up a single earned run, finishing out the ballgame.

After being sent down briefly, Patrick returned and finished out the year. He credited his teammates in Milwaukee with making him feel welcome.

The summer of Patrick's first season in the majors also coincided with the 1998 home run chase between Mark McGwire and Sammy Sosa, a chase where the luster was still years from wearing off.

Regarding the pitch that Sosa used to tie the record, Patrick said he wouldn't have thrown a different pitch.

"It was a situation where I felt like I was going with my best pitch in that situation," Patrick said. "It just so happened it didn't work out. The ball stayed up in the zone and he crushed it out of the ballpark.


"I didn't second guess myself on that one. It was a pitch that just stayed up in the zone. He was hot. He was hot that day. He was just fortunate enough to hit No. 61 off me."

A few days later, Patrick recalled meeting Sosa, telling him what a great opportunity it was to face him. Sosa also signed a couple baseballs for him.

Throughout his time with the Brewers that year, Patrick said he never got complacent about his spot. In his 32 appearances, Patrick posted 4.69 ERA, going 4-1.

The next year it was back to AAA, with the Giants. But Patrick also pitched well at AAA with the Giants, at Fresno, going 14-11. He then got his return trip to the majors that September.

With San Francisco, Patrick got into six games, 5.1 innings, giving up six earned runs. Those six games with the Giants ended up being the last of his big league career.

"It was a great opportunity," Patrick said of his time in the bigs. "I cherished every moment I had in the big leagues. I still talk to my kids about it to this day."

Patrick, though, didn't stop playing until 2005. He moved to the Marlins for 2000, playing the year at AAA Calgary. He admittedly had an awful year, going 5-12. Off the field issues, he recalled, meant he didn't have himself prepared like he should have, "and it showed," he said.

From there, Patrick went to Mexico. He even went to Korea and Taiwan, all in an effort to try to get back to the bigs and simply to keep playing.

"I loved the game at that time," Patrick said. "I just felt like, as long as I can stay in this game, and keep this uniform on, that's something that I'm going to cherish."

If he got back to the majors, he got back, he recalled thinking. If he didn't, "then, you know what? I gave it my all."

The end finally came in Mexico. Patrick just decided he was done. He was ready to walk away. He missed his family.

After some time off to spend with his three children, now age 7, 12 and 14, Patrick made some calls and was back. This time, he was a coach.

"I have the uniform on and I'm loving it," Patrick said. "I'm loving watching these kids perform, listen to what we're teaching them, what I've worked with them on, and seeing them put it together in a game. That's the joy that I get out of it now, just watching these kids grow and perform, because I was there."

"To see what they do in the bullpen and then it translate to the game, man, it makes you feel good inside," Patrick said a short time later.

And, of course, he wants to see them make it to the majors.

"That's what I strive for, to teach them the knowledge that I've learned over the course of the years and going out there see them put it together perform the way they been performing is outstanding."