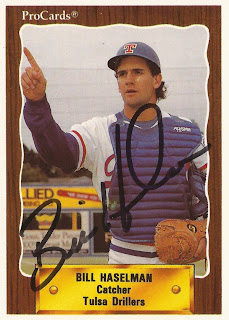 SAN BERNARDINO, CA - The first month Bill Haselman spent in the majors, he recalled recently, he was nervous.

A September 1990 call-up for the Rangers, Haselman played in seven games, got 13 at bats and picked up two hits.

"I was very nervous doing it," Haselman told The Greatest 21 Days recently in San Bernardino, Ca., where he manages in the California League.

"It's like I noticed everything around me. But then, the next time I got to the big leagues, I didn't feel that anymore. I felt more prepared and it was like, 'You know what? It's still the same game.' "

Haselman's next chance at the big leagues didn't come until two seasons later, with Seattle. But, for Haselman, the chances kept coming. He ultimately played the same game in 13 major league seasons, finding a home on major league rosters as a backup catcher.

Haselman spoke with The Greatest 21 Days before his Inland Empire 66ers took on the Rancho Cucamonga Quakes at Inland Empire's San Manuel Stadium.

Haselman is in his first season as 66ers manager, his second managing in the California League, after previously serving as a coach for three seasons with the Red Sox.

Haselman touched on his beginnings in the game, growing up in the San Francisco Bay Area, walking on at UCLA only to graduate a first-round pick of the Rangers.

He also spoke of making the majors in his fourth professional season, his effort to get back and, once back, his efforts to stay and his unfulfilled efforts to take that last step to be a starter. Then his efforts to channel his years as a player to years as a coach and manager.

Born in New Jersey, Haselman moved to the Bay Area with his family at the age of 5. It was there, in Saratoga, Ca., as Haselman grew that he learned the game through his father Albert.

It was his father, Haselman recalled, who got him into the game early. Haselmen quickly grew to love it.


It also helped, Haselman said, that there weren't a lot of distractions.

"In the 70s," Haselman said, "there weren't a lot of video games and stuff like that, so we were outside all the time so we just loved to be outside and I just loved sports."

Coming out of Saratoga High School Haselman had few looks from college. Football actually was the sport that gave him his only scholarship opportunity, that was at the University of Nevada-Reno, Haselman recalled.

Haselman, though, had his sights set on UCLA. No scholarship awaited him there. But he went anyway and walked on to the baseball team. By his last year, he'd played well enough to get that scholarship.

"It was a real good school," Haselman said. "I got some breaks there and the coach was great, and he let me play and I had an opportunity."

By draft time, it was also apparent that he had played well enough to be a high draft pick.

When he was taken by the Rangers in the first round, 23rd pick overall, Haselman recalled being excited and ready to start his professional career.


"I didn't really think about that kind of life a lot of the time growing up, like a lot of people do today," Haselman said. "But I was very excited to do it."

With the Rangers, Haselman started at single-A Gastonia, and he started well. He hit .306 over 61 games.

Where he ran into trouble, though, was in his first full year, at Port Charlotte in the Florida State League. His average dropped to .245. "That first full year was tough," Haselman said. "I was happy to be there, but I wanted to do better than I did at the time."

It was at year's end in 1990 that Haselman got called into his manager's hotel room: Haselman was going to the big leagues.

"I kind of had an idea, because of my agent and everything telling me it might happen," Haselman recalled. "But, you know, when it actually happened, it was a great feeling. It was a thing you work for your whole life, to make the big leagues."

Haselman wouldn't be finally done in the big leagues as a player until 2003.

This is the first of 10 interviews conducted on The Greatest 21 Days' recent trip to central and southern California.