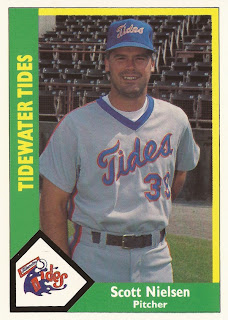 Coming off of his first stint in the majors in 1986, Scott Nielsen told his hometown Deseret News he hoped to build on his success and get back soon.

It was a stint that included five starts, one of them a complete-game shutout. Other starts, though, weren't as good.

"I've proved I can pitch," Nielsen told The News, "and my month in the bigs has taught me a lot. I suppose I look at myself as very competitive in a quiet way."

Nielsen did return to the Yankees as a September call-up. He finished the year with five more appearances, four more starts. He also picked up another complete-game shutout.

Nielsen went on to return to the majors in three more seasons, two more with the Yankees and one with the White Sox.

Nielsen's career began in 1983, taken by the Mariners in the sixth round of the draft out of Brigham Young University.

Nielsen made AA Chattanooga his first year, then hit AAA Columbus, after a trade to the Yankees, in his second.

After arm surgery limited his 1985 season, Nielsen came back to make the Yankees in July 1986. He then threw those two complete-game shutouts, en route to a 4-4 record in nine starts and a 4.02 ERA.

For 1987, Nielsen moved to the White Sox in another trade. There, he went 3-5 in 19 outings, seven starts. One of his wins came in a July 17-0 blowout against the Indians, another complete-game shutout.

"Sometimes it's difficult pitching with a big lead," Nielsen told UPI after that game. "You can lose concentration. I never expect to strike out a lot of batters. And there is a lot of pressure in pitching a shutout. But it is more relaxing when you know your team can score some runs."

Nielsen returned to the Yankees for 1988, getting into seven games, two starts. He gave up 15 earned runs in 19.2 innings of work.

His final year with playing time in the majors came in 1989, two final relief outings in June with the Yankees, just two-thirds of an inning of work, ending his big league career.