The Greatest 21 Days caught up with Russ Morman in July 2012, read the two-part interview: Russ Morman, Playing A Game 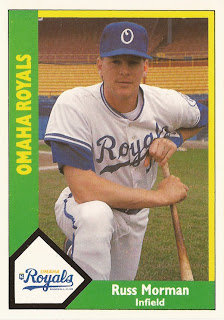 Russ Morman had been in a slump, he told The Associated Press. He just happened to break out of it in his major league debut.

In that debut, Morman went 3 for 4, including a home run. Two of those hits, the home run and a single, also came in the same inning.

"We had a lot of double headers backed up (in the minors), but when they called me up, the adrenalin began flowing," Morman told The AP afterward. "It's still going. The first hit was a thrill, but the homer was a bigger thrill."

Morman made the White Sox that year in his fourth professional season. He went on to return to the  majors in eight more seasons, his last major league time not coming until 1997.

Morman has since gone on to a career where he is working to help others make it to the majors, serving as a coach in the minors.

Morman's professional career began in 1983, taken by the White Sox in the first round of the draft out of Wichita State University.

Morman started at AA Glens Falls, first making AAA Buffalo in 1985. For 1986, he was seen as having a shot at making the White Sox out of spring training, according to The Chicago Tribune.

"If I get sent down," Morman told The Tribune that spring, "I'll be disappointed, but it's not like I'm getting demoted. I'm just not ready yet. I know I'll play in the big leagues."

Morman's time ended up coming that August, with his big debut. That first year with the White Sox, Morman got into 49 games, hitting .252 with four home runs. Though he played in eight major league seasons, Morman would never get more playing time in a single campaign.

Morman made it back to the majors in 1988, after a season back at AAA. He got into 40 games for them that year and 37 the next.

He moved to the Royals for 1990 and 1991, getting into just 12 big league games each year. He did, however, have a big Triple-A Classic in September.

"Guys were talking about what I had done to prepare myself for that game," Morman told The Baltimore Sun after a four-hit AAA playoff performance. "They said whatever it was, keep doing that."

Morman, though, kept at AAA, for the next two seasons. He arrived with the Marlins in 1994, making it back to the majors in that season and each of the next three.

By 1997, Morman was solidly referred to by The South Florida Sun-Sentinel as a career minor-leaguer. He was in his 14th professional season, but he was also hitting well.

"All I can do is keep swinging and hope I get a break," Russ Morman told The Sun-Sentinel. "That always has been all I can do."

Morman returned to the majors for one last time that September. He got into four games, going 2 for 7 with a home run.

Morman continued playing in the minors into 1999. His playing career over, Morman then began his post-playing career as a coach in the minors. For 2012, Morman is serving a hitting coach at AAA Fresno. He started out in 2000, as manager at single-A Kane County.

To The Tribune in April 2000, Morman explained his early philosophy to coaching.