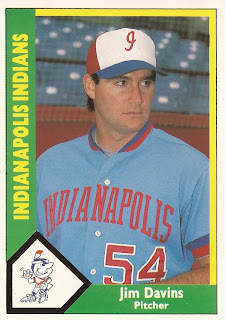 Once an outfielder, Jim Davins was now a reliever. He was also trying to work his way into a spot on the Twins' major league roster this spring in 1989.

It was a goal that seemed realistic to Twins VP of player personnel Bob Gebhard, according to The Orlando Sentinel.

"We like him. We like his arm," Gebhard told The Sentinel of Davins. "We see him as a short man in the bullpen. We think he is part of the future."

For the Twins, though, Davins' future with the organization only lasted one more year. And it never involved a trip to Minnesota.

Traded the next off-season to the Expos, Davins played just two more seasons in the minors, his career ending without him making the majors.

Davins' professional career began in 1984, taken in the second round of the January draft by the Pirates out of the University of Maine at Orono.

With the Pirates, Davins started in 1984 in the rookie Gulf Coast League. He's credited with just one game, four hitless at bats.

After one more year in the Twins system, between Portland and AA Orlando, Davins' future with the Twins turned into a trade to the Expos for Jim Dwyer. He played 1990 mostly at AAA Indianapolis and stepped back to AA Jacksonville.

The frustrations also started to mount, according to Davins' teammate at Indianapolis, Steve Fireovid. In Fireovid's book "The 26th Man," Fireovid describes Davins getting sent down to Jacksonville in June to try and help the team as a closer. But it wasn't where Davins wanted to go.

"The optimist will say that he ought to go down there, save every game he can, and everything will come out okay," Fireovid wrote of Davins. "I'm close enough with Jim to know he'll do his best to arrive at and maintain that attitude. He sure tried to while he was here."

Between Jacksonville and Indianapolis, Davins got into 44 games, saving four games. His ERA was 4.48.

Davins played just one more season, signing with the Brewers at AAA Denver. He only got into 25 games, his season starting late after he suffered a pulled hamstring in spring drills, according to The Milwaukee Sentinel.