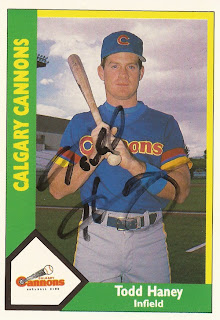 Haney and his wife Kira were packing up their Indianapolis apartment in September 1992, looking to head home to Texas.

Then the phone rang. Plans changed. Haney was on his way to Montreal.

"It's the phone call that I'll never forget," Haney recalled, putting his thoughts together, "the tears of joy with my wife that I'll never forget. The realization of a goal, a lifelong goal, and taking a step back and realizing how much time and effort you put into it and being rewarded.

"It's just something that every kid dreams about and to have an opportunity to go play, is just a phenomenal experience."

Haney made the majors that year in his sixth season as a pro. He also climbed the minor league ladder having started as a 38th round draft choice by the Mariners in 1987.

Haney spoke with The Greatest 21 Days recently about his trek to pro ball (Part 1), his path to the majors and his efforts to get back.

He also spoke about his time since, teaching young players the game as a founding instructor with Waco Storm Baseball and his appearance in the June 2012 Hall of Fame Classic in Cooperstown.

Going into the 1987 draft, Haney wasn't even sure he'd get an opportunity to be drafted. A senior, he hadn't been drafted in previous years.

His type of play didn't seem to command the full attention of scouts.

"I was a blue-collar kind of player," Haney said. "I didn't throw 90 mph. I didn't hit towering home runs. I wasn't a speedster. I just played the game hard and did everything I could to help our team win a baseball game."

When the opportunity did present itself, albiet in the 38th round, Haney said he was just thrilled to be able to continue playing.

He started off at short-season Bellingham, a teammate of the Mariners' top pick that year, Ken Griffey, Jr.

Early on, Haney recalled, he was just playing to play. And playing to try and impress somebody. From the 10-, 12-, 16-hour bus rides, the majors seemed like a long way away.

"At that time, I was learning so much and just taking all the information in I could," Haney recalled, "just trying to be the best player that I could."

Haney hit .254 that first year at Bellingham. He first made AA in 1989 at Williamsport and was slated to return to Williamsport for 1990. But then an injury intervened.

The AAA starting second baseman got hurt. After just a game at AA, Haney moved to AAA Calgary for the rest of the season. Haney hit .400 his first month there, he recalled, and never looked back.

Haney ended up hitting .339 on the year. He credited Mariners coach Ralph Dickenson with working with him that spring to improve his swing and how best for him to make a positive impact on his team.

Despite his success at Calgary, though, Haney didn't get called up to Seattle. The Mariners already had a pretty good second baseman in Gold Glover Harold Reynolds.

After that season, Haney was traded to the Tigers. He spent the spring with them, but was released. It wasn't a good fit. Haney, though, called that release a blessing in disguise because he ended up signing with the team that would eventually bring him to the majors, the Expos.

Before that could happen, there was still more disappointment to come. Haney hit .312 at AAA Indianapolis in 1991, again without a call-up. The Expos also had a pretty good second baseman in Delino DeShields.

In 1992, Haney lost a part of his year after fouling a ball off his ankle. He recalled finishing that at bat, hitting a ball into the gap. But, after limping to second, he went straight to the hospital. The broken ankle put him out for two months.

By the end of the season, he'd made it back to the field. But, when the September call-ups came, he was passed over again.

It was frustrating, Haney recalled. But it wasn't something he could control.

That was advice he recalled getting early on in A-ball: Control what he could control.

"You've got to control what you can control," Haney said. "That is playing hard and forcing the issue.

Then, packing up to go home, Haney got that call. And Haney continued packing, to go to Montreal.