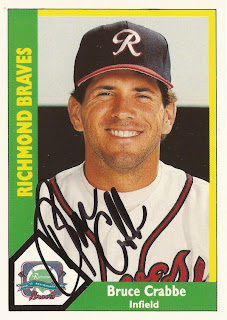 TROY, NY - There are times, Bruce Crabbe recalled, when managing in the minors gets a little frustrating. Especially when the wins aren't coming.

Crabbe, though, understands that, while it might be frustrating, the end goal isn't necessarily impacted by that.

"It's not all about winning at this level," Crabbe told The Greatest 21 Days recently. "It's about those four to five guys who have the possibility of making it to the big leagues - and making sure that they're ready when they get that chance to go to the next level."

Crabbe's playing days, spanning nearly a decade, saw him get to each next level, except the ultimate one, the majors.

Crabbe spoke with The Greatest 21 Days recently at Joseph Bruno Stadium in Troy, NY, as his Lowell Spinners, the short-season affiliate of the Boston Red Sox, visited the Astros affiliate Tri-City Valley Cats.

The short-season manager touched on his career from its beginnings as a youth in Florida, to success in college and in the minors. He also spoke of his time at AAA, time that eventually spanned six seasons.

It was also time at AAA that Crabbe recalled going out and working to be ready for when that last step came. But it was an opportunity that never came.

Crabbe was born in Kentucky, but largely grew up in Florida. His father, Tom Crabbe, was in the insurance business and was drawn to the weather and simple newness that was Florida. The father was also a golfer, and there were plenty of opportunities for that there.

The family settled in Orlando when Bruce was about 8, young enough for Bruce to consider himself a Floridian.

Growing up, Crabbe played a host of sports, from tennis to golf to basketball to football. But it was baseball he seemed to take to in the Florida climate better then the rest.

Helping him out with whatever sport he was playing, though, was his father, Crabbe recalled.


"He did everything with me," Crabbe said. "He was my golf teacher, my tennis teacher, my swing coach, my fielding coach. He told me how to run routes in football and how to shoot a free throw. He was kind of my everything."

With his father's help, Crabbe began to get better, especially at baseball. He tried his hand at pitching, but found out he couldn't pitch. But then his hitting and defense took over and he settled in the infield, at shortstop.

As a Florida kid, Crabbe had his sights set on being a Gator. He also did well enough in high school to have the Gators have their sights set on him.

Bergman suggested Crabbe play his first year in junior college and move to Florida for year two. The promise was, he'd have a full ride to Florida after that.

So that's what Crabbe did. He went to Gulf Coast Community College. He didn't play shortstop, though, he played outfield.

Still, he played well enough for others to take notice - the Expos and the Pirates. The Expos took him in the first round of the January draft; the Pirates in the second round of the June secondary draft.

He declined both offers. Instead, he went to Florida and Crabbe said he has no regrets.

At Florida, Crabbe had success, helping the Gators to two conference championships, one in 1982 and the other in 1984.

But he also suffered loss, a big loss. His father Tom, who had helped him with everything when he was younger, passed away.

"I think that set me back a lot," Crabbe said. "He was my mentor. It kind of took me away from my concentration on baseball."

With the help of his mother, though, he was able to get back on the field. Gainesville wasn't too far from Orland.

Once though, though, all that help that Crabbe received from his father along the way showed itself again.

And, when the Cubs came calling in the 19th round of the 1984 June amateur draft, Crabbe became a Cub.

The Cubs were a pretty big name, Crabbe recalled thinking. And he was pretty happy about it.

"Unfortunately," Crabbe said, "I knew at that point in time that I was kind of at the mercy of my playing capabilities at that time, because you sign as a senior, you just want a chance. I took the chance and hopefully was going to make the best of it."

And Crabbe then began his professional career, one that would take him to AAA by his fourth season and one where he'd still be in AAA in his ninth.