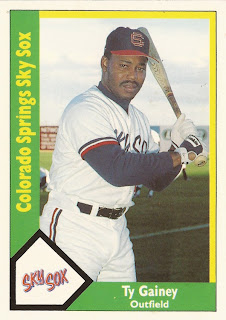 Ty Gainey had a hot spring for the Astros in 1985, so hot, that Astro brass began noticing.

Gainey hit .370 on the spring, with 10 extra-base hits, The Houston Chronicle wrote. He did all of it without having hit previously above AA.

"I told him that I don't think I've ever seen a player improve so much from one spring to the next," Astros manager Bob Lillis told The Chronicle. "When spring training started, there were a lot of people who weren't on his side. Now everybody is."

For Gainey, though, the interest soon wained. A poor spring the next season and a Houston outfield that he couldn't seem to find a home in left him playing largely in AAA.

He made it to Houston in 1985 and each of the next two seasons, but his big league career ended up consisting of 57 total big league games.

Gainey's playing career, though, continued much longer, taking him to the Indians and Pirates systems and into Mexico, Taiwan and Japan. His last recorded playing time didn't come until 2000 - more than two decades after he was first drafted.

Gainey was first drafted by the Astros in 1979, in the second round, out of Cheraw High School in South Carolina.

Gainey started in the rookie Gulf Coast League. He made it to single-A Daytona Beach in 1981, then to AA Columbus full time in 1983.

Going into 1986, though, Gainey couldn't replicate his 1985 spring, coming in overweight, according to The Chronicle. He was also quickly returned to the minors. At Tucson that year, Gainey hit .351, and won the league batting title.

Gainey also had the best of his three seasons with time in the majors, getting back to Houston for 26 games, hitting .300. In spring 1987, Gainey acknowledged to The Orlando Sentinel his mistakes from the previous spring and he hoped they were behind him.

"This year, my goal from day one has been to make this club," Gainey told The Sentinel. "If I don't, I know the reason. It's not that I can't do it. It's the numbers game. And my number hasn't come up."

Gainey played just 18 games for the Astros in 1987. They were the last games he played in the majors.

Gainey only got five games in 1988 at AAA Tucson. He moved to the Indians system in 1989, starting 1990 back there. He moved to the Pirates system mid-year, then to Mexico City. Gainey made another attempt at the majors in spring 1991, with the Pirates.