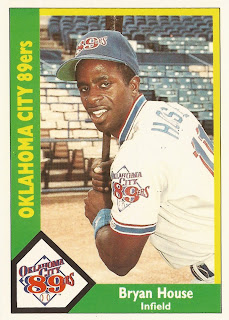 Bryan House's manager at single-A Peoria wasn't sure what he had in his second baseman in 1985, according to The Chicago Tribune.

As the season wore on, though, House began to show manager Pete Mackanin what he could do, ending the year with 76 RBI and 45 stolen bases.

"He's the catalyst for this team," Mackanin told The Tribune that August of House. "Now the only problem I have with Bryan is should I lead him off because he runs so well or do I hit him third or fifth because he drives in runs? So I compromise. I hit him second."

While House showed what he could do that year at Peoria, and he eventually showed enough to make AAA Iowa, House never could show enough to make the majors.

House's career began in 1984, taken by the Cubs in the ninth round, out of Illinois State.

At Illinois State, House made the All-Missouri Valley Conference Team in 1984. He also led his team that year in stolen bases, with 20, in Doubles, with 15, and runs, with 49.

In 1986, he moved to single-A Winston-Salem, then AA Pittsfield in 1987. He made the Eastern League All-Star Team in 1988 after returning to Pittsfield.

In August 1988, House got called up for the exhibition Hall of Fame game in Cooperstown, as the Cubs played the Indians. That winter, the Cubs sent him to play winter ball in the Caribbean.