My wife and I recently saw some major league action in Montreal. At Olympic Stadium, no less.

We saw it nearly eight years after the last Major League Baseball game was played there.

This "major league" action was Major League Soccer and the new Montreal Impact.

We actually didn't go there really to see the soccer game. We went there, or at least I wanted to go there, to see what was left, if anything, of the old Expos in the stadium they called home for nearly 30 years.

The quick answer to what is left of the Expos at Olympic Stadium eight years on: Hardly anything.

Backing up a bit, I got the opportunity to go up to see an actual Expos game back in 2002. I drove up with a friend to see the Cubs play. It was actually this game. The Cubs went up 6-0 and proceeded to lose 15-8.

And this is how the old stadium looked then. It wasn't pretty. But it was baseball pretty. Note the backstop with the viewing area right behind home plate.

My wife and I met the next year, in 2003. And we started going to baseball games together in 2004. We actually went to four major league games that year, at Comerica Park, Wrigley Field, Fenway Park and Shea Stadium. But we didn't make it up to Montreal, and we easily could have. I just didn't get the message that the Expos were really, truly leaving that year.

We've since seen games at a total of 17 major league parks. But we never got to see the Expos at Olympic Stadium. It's one of my great regrets.

Seeing a soccer game there is obviously a poor substitute. But we got to see a game at Olympic Stadium, just not a baseball game.

So this is how Olympic Stadium looked 10 years after my one and only trip. Obviously, this is the soccer configuration. The area behind where home plate was was filled. But it was filled with soccer hooligans, beating their drums and chanting their chants. We actually originally sat over that way, but the chanting was too much.

We stayed there for much of the first half. The Impact and the Red Bulls each got a run, or something.

But we had a stadium to see.

So, we went looking for signs of the Expos. Going in, I figured there would be some acknolwedgment of the franchise that called the city home for so long. Of the players.

Looking around the interior and around the concourse, though, there was nothing.

We didn't spot a single thing that said "Expos." Maybe it was there, but was just covered up by the Impact signs. This was a soccer game after all.
An obvious example of that was the scoreboard. Note the big Expos sign to the far left.

And here's how it looked during the soccer game. Note in the place where the Expos sign was, was now a soccer jersey. The Quebec sign to the far right, though, was unchanged.

What still had an Expos flavor, if not the actual Expos logo, were the concession stands. With no real tenant since the team left, those have remained unchanged. Even the Impact had no reason to change those.

This was the last game at Olympic Stadium before they moved into their new soccer-specific stadium.

This is the Bienvenue Grill, note the color styling on "Grill" and the pinstripes. We picked up some mais souffle and Coca-Cola Diete.

If the other concession stand didn't say Expos, this one almost did. It actually has a baseball right there to the left of the marquee.

That's about it for Expos references.

Except for this one.

This is the only Expos logo or direct reference I spotted in the stadium.

And it was on this guy. One of the soccer hooligans. 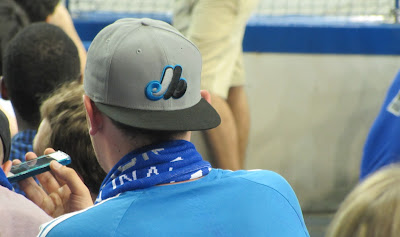 Some other photos from Olympic Stadium 2012: