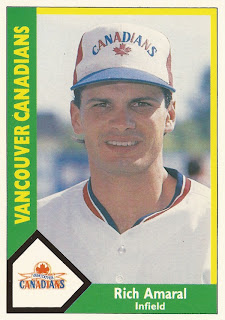 Rich Amaral played well in the minors. He did so for nearly a decade, watching other players take that final step as he stayed behind.

He missed making the majors out of spring training in 1990, partly due to the owner's lockout, The Los Angeles Times wrote. Amaral would have to until the next season, 1991, for his debut.

"What can you do? You can't control what happens sometimes; that's just baseball," Amaral told The Times in June 1993. "I just accepted it. I love playing the game; that's all you can do is keep plugging away. A lot of people give up too soon."

By the time he spoke to The Times, Amaral had made it. At the age of 31, he was a regular in the major leagues, with the Mariners.

Amaral's path to that point started back in 1983, as the second round pick of the Cubs, out of UCLA.

With the Cubs, Amaral got off to a slow start. He didn't make AA until 1986, at Pittsfield. He then stayed there. For three seasons. He played second base his first two years there, then got time around the infield in 1988, learning skills that would later benefit him in the majors. In 1988, he hit .277, stealing 54.

Then the White Sox came calling, taking Amaral in the Rule 5 draft. He played 1989 at AA Birmingham, hitting .285 with 57 stolen bases. Moving to AAA Vancouver in 1990, Amaral continued his success, hitting .301. But he didn't get called up to Chicago.

For 1991, Amaral signed with the Mariners. He played most of the year at AAA Calgary, hitting .346 with 30 steals. He debuted in Seattle in late may, getting into 14 games.

"I'm sure I appreciate it more," Amaral told The Associated Press in April 1993 after a game-winning single. "I put in a lot of hours working on the little things that you need to do well to play in the major leagues. Finally, it's starting to pay off."

Amaral hit .290 that year, stealing 19 bases. He also came in fifth in the Rookie of the Year balloting.

"It's not a fair game," Amaral told The AP after that four-hit performance. "You can hit the ball hard and make outs and hit the ball easy and get hits. Sometimes you're lucky."