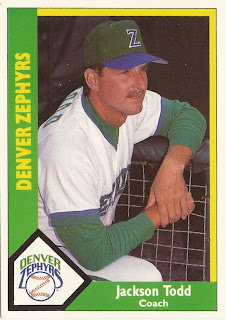 The Blue Jays finished the 1980 season on a three-game winning streak, the final game won by right-hander Jackson Todd on a complete-game six-hitter.

Todd finished up his third season with time in the majors with a career-best 5-2 record in 12 starts.

"Actually, I wish the season could last forever," Todd told told UPI afterward. "It's fun to come to the park now. It's a lot of fun playing the game again."

For Todd, just that he was there was an achievement. Six years earlier, a type of abdominal cancer nearly ended his career - and his life.

It was Todd's eighth season overall as a pro. His next, though, would be his last in the majors. His coaching career began shortly afterward.

Todd's pro career began in 1973, taken by the Mets in the second round of the draft out of the University of Oklahoma.

The Mets selected Todd as he was fresh off a College World Series run that saw Todd's Sooners ousted by Texas in a game Todd started.

"I was particularly pleased with the way we hit the ball against Jackson Todd," Texas coach Cliff Gustafson told The Associated Press after the Texas win, "because I consider him one of the really fine college pitchers in the country."

Todd, though, was lucky to be there, and alive, after a bout with lymphatic cancer. He was diagnosed after the close of the 1974 season. "They said I was at death's door," Todd told The AP in 1977. Chemotherapy, though, brought him back, saving his life.

To UPI in spring 1976, Todd recounted the moment he found out he had the cancer. As far as how serious it was, he wasn't told initially.

"What did I say when they told me?" Todd told UPI that spring, repeating the reporter's question. "There isn't much you can say. I wasn't frightened. They really didn't tell me how serious it was."

For 1980, Todd made the Blue Jays in August, winning four of his first five decisions. His fourth win came Sept. 9 against the Yankees, giving up four earned runs in 6.2 innings of work.

"I did my job, kept us in the game and kept us close," Todd told reporters after the game. "That's all I want to do every time out."