This is Part 4 of the John Leister Interview
Part 1: Most Influential | Part 2: Out Pitch | Part 3: Proved Himself | Part 4: Greatest Day | Part 5: That Mentality 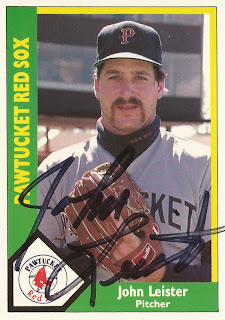 When John Leister took the mound, he was awestruck.

He was there, at Fenway Park. A major leaguer.

"Certain things you just remember forever, like it was yesterday," Leister recalled recently to The Greatest 21 Days, "and I remember standing on the mound for the National Antham and just thinking 'this is the greatest day of your life, kid.

"'Your dad's in the stands. All your buddies, they know you're here. You worked your tail off to do this. You made it. You're legitimate.'"

Leister soon faced the other reality of where he was - and who he was facing. Leister promptly saw the first four batters he faced score, the final three on a Joe Carter home run.

He then saw Red Sox manager John McNamara visit the mound, asking the rookie if he was finally ready to start pitching.

Leister has spent much of the past two decades at Alma College in Michigan, coaching baseball and football and, more recently, serving as athletic director.

Leister spoke with The Greatest 21 Days recently by phone from his Michigan home, covering his career from his start in football to his time in the majors and his time since.

Leister ultimately lasted just two innings in his debut, giving up six total earned runs. The outing was perhaps partly understandable what what it took to get him there.

Hours earlier he'd been on a full sprint to Fenway - in his cowboy boots - after misjudging the Boston streets and the time available to pick up his father at the airport. Leister recalled that spring leaving him with blisters on his feet, and having to encounter an angry pitching coach as Leister came in later than he was supposed to be there.

"Bill Fischer just reamed my butt about being late," Leister recalled. "You don't even offer an excuse, you just go get dressed."

Leister first arrived at Fenway the day before, flying back to Pawtucket, from where the AAA club was playing in Virginia. After stopping at his apartment to pick up his stuff, he headed straight for Boston and Fenway.

His locker, Leister recalled, was right next to Bill Buckner's. Leister remembered Buckner giving him some good-natured crap because Leister was a rookie. Roger Clemens' locker is two away. Bruce Hurst's is there, too.

The manager, McNamara, came out to greet him, too, this day before Leister's debut. Leister was there to do a job, the manager reminded him. He wasn't on vacation.

Then there were the other cues as to where he was: The real grass, the balls that were white, the uniforms that were clean - and fit.

"You're sitting there and you watch them play," Leister said, "and somewhere around third or fourth inning you go 'holy crap, these guys hit. Oh my God.'"

That game over, Leister remembered getting back to his hotel - a really nice hotel downtown. There in his room was a bottle of champagne, apparently, he assumed, to celebrate the occasion. But it obviously went against what he was there to do. The bottle went to his wife for later.

"Then you lay awake all night and go between being really happy and scared to death because you've got to pitch tomorrow," Leister said.

After his debut, where he gave up those six runs in two innings, the Red Sox came back to win the game, Leister getting the no-decision.

On the plane out to the next city, Leister recalled getting ridden by his teammates the whole way there. Dave Henderson kept on him for a good two hours.

"It was good-natured type of stuff, but it kind of helped me - they don't hate me," Leister said. "It kind of calmed me down a little bit."

Leister got two more starts on that trip, neither, though, went well. Back home against the Twins, he gave up four earned runs in 5.1 innings.

Then, against the Tigers, he gave up six earned runs in 3.1 innings. After two more relief outings, the second where Leister gave up four earned runs in an inning of work, he was sent back down.

"When they tell you you're going back down, you know, it sucks," Leister said, "because you've got to admit that maybe you're not all that. Maybe I'm not legit.

"But I got cut cut from the Steelers and for me, it was like 'OK, for me it was like this is part of the process. I need to get better at some stuff."

He was also going from a team that maybe didn't think he could pitch, to a team, Leister recalled, that felt like they needed him.

Leister recalled getting back to Pawtucket and being greeted by his manager Ed Nottle. A veteran baseball man, Nottle first managed Leister the year before and he also sent Leister to the majors weeks before.

As the rest of the team hit the field, Nottle held Leister back.

"You don't belong here," Leister recalled Nottle telling him. "You know where you belong.

"You got your cup of coffee," Nottle continued, "now go for the pot. Don't be satisfied with that."

By September, Leister was back in the majors.

Go to the Final Part John Leister, That Mentality
Posted by Steve78 at 2:03 PM