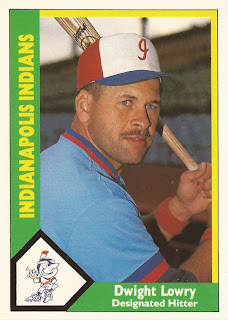 Tigers manager Sparky Anderson couldn't have been happier with the performance of young fill-in catcher Dwight Lowry in August 1986, according to The Associated Press.

By early August, including a stint of 12-consecutive starts, Lowry was hitting .341, including hitting a game-winner, The AP wrote.

"He's really shown something," Anderson told The AP of Lowry. "He's been a key. I don't know how anybody could be doing a better job for us than Lowry."

Lowry went on to get into 56 games for the Tigers that year, his average settling in at .307. It was his second season of four with time in the bigs.

Lowry's playing career over, he went on to be a manager in the minors, spending four seasons in the Tigers system. He managed until his passing in 1997, at the age of just 39.

Lowry's career began in 1980, taken by the Tigers in the 11th round, out of the University of North Carolina.

He played that first year at single-A Lakeland, hitting AA Birmingham briefly in 1981. In 1984, Lowry made AAA Evansville. He also made Detroit.

With the Tigers that year, Lowry got into 32 games, hitting .244. The Tigers went on to win the World Series, Lowry, though didn't make the playoff roster. That May, Lowry's first major league home run proved the difference in a Detroit win over Oakland.

"I can hardly explain how it felt to hit that home run," Lowry told The AP afterward. "With two strikes on me, hitting a homer was the farthest thing from my mind."

Lowry spent the next season back at AAA, with 74 games at Nashville. Then in 1986, he returned for those 56 games and that .307 average. He also hit three home runs.

For 1989, Lowry tried a different circuit, the Senior Professional Baseball Association. Then, in 1990, Lowry returned to the Expos, playing the season at AAA Indianapolis, without getting called up to Montreal.

By 1994, Lowry was managing in the minors, at single-A Fayetteville. He managed there for three seasons, moving to short-season Jamestown for 1997.

Then, an hour after a Jamestown victory over Batavia, he collapsed and died outside his home. He'd had a history of heart problems.