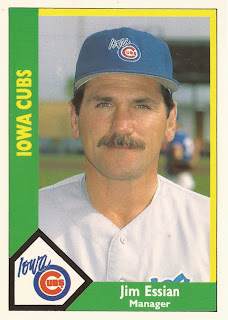 Speaking to the Charlotte-area Rock Hill Herald in December 1988, Jim Essian explained his managerial style as one where his team runs.

In his first three years managing with the Cubs organization, Essian's teams led the league in stolen bases, he told The Herald, doing it, he also noted, with players who possessed speed.

"But," Essian told The Herald, "you could characterize my team as being one that continuously forces the defense to make a play. We bunt a lot. I believe in dropping that little ball down there and forcing that guy to make a good play to get you out."

Essian took that risk-taking style to AA Charlotte in 1989, his third season at AA with the Cubs. He went on to make AAA Iowa as manager in 1990. Then, in 1991, he took that style to Chicago, taking the helm of the big league Cubs.

Essian returned to the majors with the Cubs, having been in the bigs for parts of 12 seasons as a player in the 1970s and 1980s. The catcher played his last big league game in 1984, then embarked on his managerial career.

In 1985, Essian took the helm of the old Miami Marlins, the independent Florida State League entrant. Essian also played, getting into 28 games.

He joined the Cubs organization in 1986, managing at single-A Winston-Salem. He made AA for the first time in 1987, at AA Pittsfield. He stayed at Pittsfield two seasons. In 1987, he took his Pittsfield Cubs to the Eastern League playoffs. From July on, his AA Cubs were 36 games over .500.

At Charlotte in 1989, Essian took his Knights to a 68-75 record. His team also recorded 169 stolen bases, and even a few baskets. The Herald wrote in May about Essian's preference to get the team onto a basketball court when it rained.

That fall, Essian got back onto the field himself, as a member of the Senior Professional Baseball Association.

He returned to the manager's office for 1990 and moved up to AAA Iowa. He started 1991 back at Iowa, before being named manager of the Cubs in May, after Don Zimmer was fired.

After Essian first game, which turned into his first win, Cubs first baseman Mark Grace praised his new manager. Grace was one of 15 members of the team who had played for Essian in the minors, The Chicago Tribune wrote.

"He's very encouraging," Grace told The Tribune. "He's almost a cheerleader-type. He wants us to know he's behind us."

Essian managed out the season, going 59-63. He did not return for another one, let go in October.

"I had a tremendous experience (managing the Cubs last year)," Essian told The Tribune in January 1992. "I hope it wasn't a once-in-a-lifetime experience."

Essian remained with the Cubs for 1992, but served as a scout. Essian returned to managing in 1996 at AA Norwich with the Yankees, but he never got back to the majors.