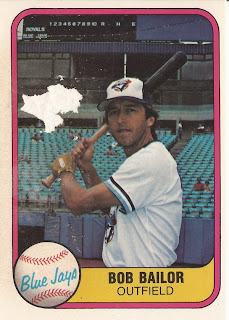 Over the previous two seasons, Bob Bailor got into a total of only 14 major league games with the Orioles.

With his selection as the Blue Jays first pick in the November 1976 expansion draft, that was about to change.

"He was the best shortstop available," Toronto GM Peter Bavasi told The Canadian Press of Bailor's selection. "We've said all along we'll concentrate on building strength up the middle. That's why we picked him."

Bailor quickly proved his worth, giving the Blue Jays strength in the batters box, as well. He got into 122 games for the expansion Blue Jays in 1977, hitting .310.

Bailor went on to play in a total of 11 major league seasons, ending in 1985. He also went on to a decade-long post-playing career, as a manager and coach with the team that gave him his first extended time in the bigs, the Blue Jays.

Bailor's career began in 1969, signed by the Orioles as an 18-year-old amateur free agent out of the Connellsville American Legion in Pennsylvania. 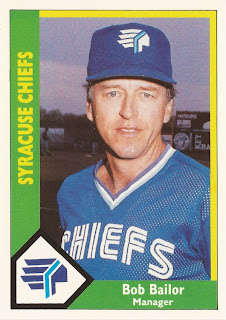 Bailor started at rookie league Bluefield in 1970, moving to short-season Aberdeen in 1971. He made AA Asheville in 1973. He also got a brief look that year at AAA Rochester.

He debuted in Baltimore as a September call-up in 1975. He got into five games, getting one hit in seven at bats. He returned for nine more games in 1976, serving as a backup for an extended period.

With the Blue Jays the next August, and having success, Bailor looked back on his brief playing time with the Orioles.

"Deep down I thought I could make it up here but there's always that doubt until you get a chance to prove it to yourself," Bailor told UPI.

"I'll just have to wait until another left-hander pitches," Bailor told reporters after the game. "I don't have to like it, but I'll do it."

Bailor got into another 118 games with the Mets in 1983, hitting .250. In August, Bailor got two hits in one inning. It was a feat he had done before, he told The Associated Press.

By 1987, Bailor started his coaching career, managing in the minors with the Blue Jays.
Posted by Steve78 at 1:00 PM