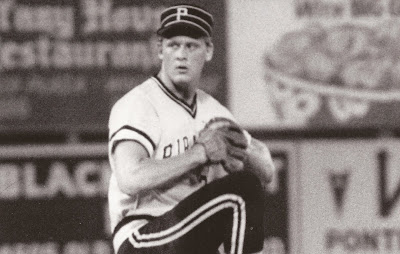 Tony Blasucci winds up to deliver a pitch early in his career with the Pirates organization. (Tony Blasucci Photo) 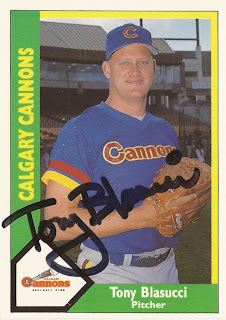 Tony Blasucci was never meant to be a starter. When the White Sox figured that out in 1987, Blasucci finally found success.

Until then, though, the left-handed starter was mired in single-A with the Pirates for four seasons, never getting more than four wins. He also lost two of those seasons almost completely to arm troubles.

"I would go 3, 4, maybe 5 innings (with the Pirates system) and I was done," Blasucci recalled recently. "The first thing the White Sox did when they signed me was put me in the bullpen. That's when I really took off and did very well."

The newly minted reliever returned to single-A, picking up nine saves for Daytona Beach and an ERA of 2.31. The next year, he got his first look at AAA and he was even talked about as making the big club in Chicago.

Blasucci spoke with The Greatest 21 Days recently from his home in Florida, covering his eight-season career in the pros, as well as how he got there.

He entered the pros in 1983, drafted by the Pirates in the first round of the June secondary draft, out of Florida State. Blasucci went straight from there, to the NY Penn League at Watertown.

Blasucci remembered the transition as a stark one, going from a high-level college program to the low minors.

"You're going from everything's first-class at Florida State to riding buses, playing in stadiums that were less than desirable, if you know what I mean," Blasucci said. "It was a culture shock. It was a difficult situation."

Right there with him, helping him through, Blasucci recalled, was his then-girlfriend and future wife, Kris. "I couldn't have gotten through the whole thing without my wife," Blasucci said.

The two met at Florida State. She was also an athlete, on the basketball team. Valentine's Day will mark their 25 anniversary. 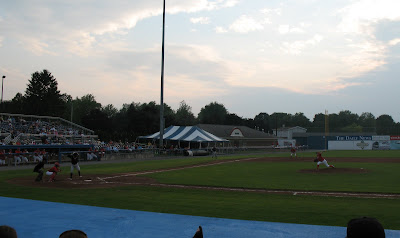 Dwyer Stadium in Batavia, NY, in 2010. Tony Blasucci played at old Dwyer Stadium as a member of the visiting Watertown Pirates in 1983.

At Watertown, Blasucci started 14 games that first year, posting an ERA of 3.84. He picked up just one win, though, to seven losses.

Then came his arm problems, bone spurs to be exact. He lost all of the 1985 season, save for one game, to elbow surgery. He even thought his career was over, Blasucci recalled.

But he worked to get back. He came back for seven games, five starts. The Pirates, though, didn't believe he was back.

The next spring, in 1987, Blasucci was called in to speak with the organization's director of player development, Branch Rickey III.

"He told me he didn't feel I was a prospect any more," Blasucci recalled. "And he didn't think I could be successful.

"I told him I appreciated the opportunity. I told him that I disagreed with his assessment." 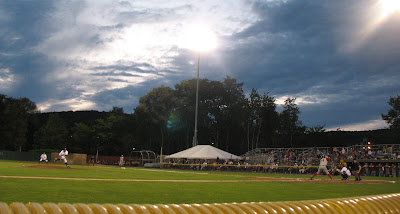 Damaschke Field, Oneonta, NY, in 2009. Tony Blasucci played at Damaschke Field as a member of the visiting Watertown Pirates in 1983.Released, Blasucci hopped in his car, drove from Pirates camp in Bradenton to the White Sox camp in Sarasota. There, he got his tryout, not only pitching well enough to get invited to camp, but also well enough for the White Sox to wonder why the Pirates let him go, Blasucci recalled.

The invitation to camp, with no guarentees, was enough for Blasucci. "All I wanted was a chance," Blasucci said.

His first game that spring, Blasucci recalled, was against the very Pirates that released him, Rickey there in the stands.

With the White Sox, Blasucci never saw Comiskey Park. But he did see enough success to eventually take him to AAA. He also had enough success to play winter ball, facing major league hitters in Puerto Rico and Venezuela.