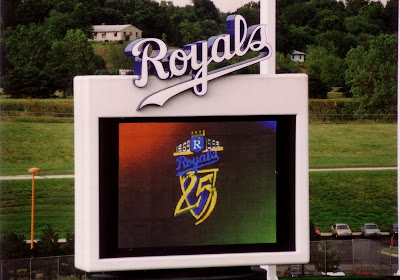 The Royals 25th anniversary logo at Kauffman Stadium in 1993. In 19 of those 25 years, the Royals roster included a McRae. (G21D Photo) 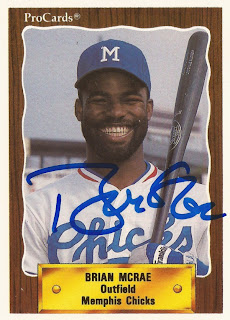 Brian McRae got the call in Huntsville. He just couldn't call anyone else.

McRae had to get to Kansas City. The 22-year-old son of Royals great Hal McRae was going to make his debut in the majors.

"I didn't know what to think," Brian McRae told The Greatest 21 Days recently, "everything was happening so fast. These were the days before cell phones. I didn't have a chance to call anybody."

"It was probably five to six hours before I was able to get a hold of anybody and let them know that I got called up."

Getting the call that morning, McRae made it to Kansas City that evening, getting into the lineup and getting a triple in his first big league at bat.

McRae spoke with The Greatest 21 Days recently by phone from his Kansas City-area home. McRae ended up playing a decade in the majors, amassing more than 1,300 big league hits.

He is now the general manager of the Kansas City Sluggers, a non-profit traveling youth baseball program. McRae is also readying to head up the Morehead City Marlins this summer in the collegiate Coastal Plain League in North Carolina.

In the telephone interview, McRae told of growing up in major league clubhouses, doing just about any job given to him and taking advice from his father's teammates.

He also told of the of the difficulties of having a father in the major leagues, the nights where he'd be in bed when his father got home from games, or the road trips when wouldn't be home. 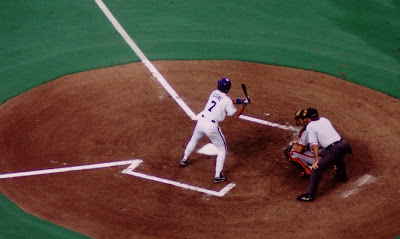 Brian McRae teammate Greg Gagne batting at Kauffman Stadium July 6, 1993. McRae went 1 for 4 in the game. (G21D Photo)But McRae also told of the making the majors and, the next year, the family ending up all in the same place again, and on the same schedule. It was before McRae's second season in the majors that his father was named Royals manager.

McRae recalled many of his early baseball lessons came from those Reds teams. Those lessons continued after his father was traded to the Royals in 1973, as the Royals were about to go on their run.

"All those were big influences because I was around winning ball clubs, a lot of great players," McRae said. "I learned my work ethic and habits of how to go about being a big league player from some of those good teams."

He also worked. McRae recalled doing a little bit of everything when he was around those teams. He was the ball boy. He was the bat boy. He worked in the clubhouse, helping shine shoes and do laundry. 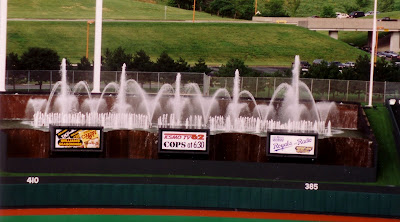 McRae grew up Bradenton, Florida, but graduated from Blue Springs High School in Missouri. The Florida roots made springs that much better, he recalled, with the family together. It also helped is first year in the minors, in the Gulf Coast League, as McRae was only a short drive from home.

Growing up, though, his father spent much of the summer on the road playing and away from home.

"It wasn't your normal household," McRae recalled, "because my dad worked odd hours, playing all night games. During school we didn't to too many games."

"It wasn't the ideal setup, but that's all we knew because that's what the job demanded and that's what my father did."

Despite the background in baseball, McRae recalled that growing up, he was actually better at football, as a defensive back and receiver.

Coming out of high school, he had multiple scholarship offers to play football, he recalled. He even signed to attend the University of Kansas on scholarship.

But he was also good at baseball, good enough to be selected by the Royals 17th overall in the 1985 draft, as a 17-year-old.

The decision to choose baseball, though, was an easy one for McRae.

"I thought that baseball was the one where I had more longevity and a chance," McRae recalled. "I didn't think I was going to be an NFL football player, but I had a chance to play longer in baseball."