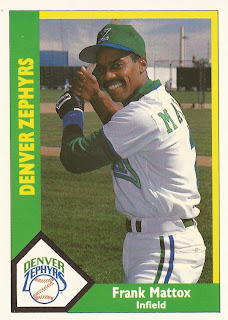 A decade after his playing days ended, Frank Mattox was hard at work in 2001, trying to find major league prospects.

Mattox was serving as scouting director of the Seattle Mariners. He was also the only African-American in that position in baseball.

"Minority or not, it can be tough," Mattox told The Los Angeles Times that June. "Whether you're playing or scouting, you have to be very patient in baseball. Things don't always advance quickly. It can take years. I've been lucky. I never envisioned I would become a scouting director so quickly."

Back in 1984, other scouts, for the Brewers, saw enough in Mattox to result in him being selected in the eighth round of the draft, out of the University of California.

For 1990, Mattox played the majority of his time at Denver, hitting .262, with two home runs in 81 games. In an August game, Mattox scored the tying run in the eighth, then knocked in the winning run in the ninth.

Mattox then went from being a player at Denver to being an assistant general manager for Denver. Mattox then went on to be a scout, first with the Rockies. By 1998, Mattox was the scouting director for the Mariners, talking up Seattle's first-round pick that year, Matt Thornton.

"He has a power slider and an above-average fastball," Mattox told The Associated Press. "He has very good makeup and has a chance to move through our system very quickly."

Thornton debuted with the Mariners in 2004 and was still playing in 2011 with the White Sox.

Mattox went on to be the Mariners' director of player development, named to that role in 2003. He was still in that job in early 2007.

Mattox was still a scout with the Mariners in early 2012, when he passed away suddenly at his home in Arizona.