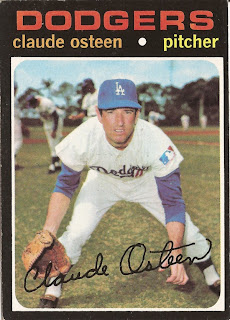 The Dodgers down two games to none, Los Angeles needed a good outing from their No. 3 starter Claude Osteen.

What the Dodgers got in that third game of the 1965 World Series was a complete-game, shutout, with Osteen mastering the Twins on five hits.

"I just feel I know how to pitch to them," the former American Leaguer told The Associated Press after that Game 3 victory. "Except for Zoilo Versalles, all the hits they got off me were on bad pitches. When I got the ball where I was supposed to, they didn't hit me."

Over that career, Osteen played in a total of 18 seasons, debuting with the Reds in 1957 before his 18th birthday. By the time his playing career was over in 1975, Osteen had amassed four wins short of 200 - winning one more than he lost. 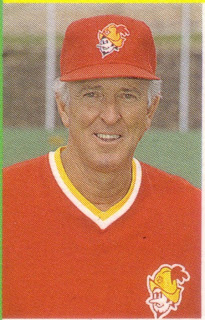 He also went on to a long career as a coach, where he spent time as pitching coach for the Cardinals, Phillies, Rangers and Dodgers. He also saw two sons go on to play pro ball.

Osteen's career began that year in 1957, signed by the Reds out of Reading High School in Reading, Oh.

Coming out of Reading, Osteen was labeled a sensation, The AP wrote, with six other teams vying for his services. He led his high school team to the state title the year before, going 16-0, with a 0.13 ERA, according to his 1960 Topps baseball card.

Still a month short of his 18th birthday, the Reds put Osteen on the mound immediately. The team hoped the hometown hurler could stick without going to the minors. Osteen got into three games, giving up one earned run in four innings before finishing out the season at AA Nashville.

Osteen played the next season between Class B Wenatchee and AAA Seattle. He returned to the majors for 1959 for two games back with the Reds. 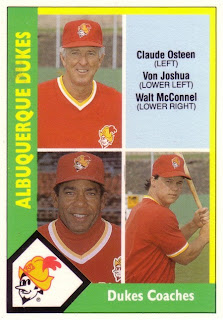 He also had another stellar World Series performance, with one mistake. Osteen went seven innings in Game 3 of the 1966 World Series. He gave up just one run to the Orioles, on a Paul Blair home run. He also took the loss, 1-0.

"I felt I got it exactly where I wanted it," Osteen told The Associated Press of that Blair home run. "Maybe down a little more would have been better. But Blair went out and got the ball."

"I really enjoyed this game," Osteen told UPI afterward. "I felt like I had the best control I had all year. And when I have good control, it's fun to pitch."

For Osteen's coaching career, go to Claude Osteen, So Many Scenarios
Posted by Steve78 at 12:00 PM