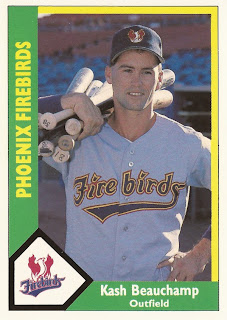 Kash Beauchamp described his selection in the 1982 January draft as like a dream realized, The Associated Press wrote.

But he still wasn't sure if he would sign.

Beauchamp apparently did well that spring, because he did sign, starting a career that spanned more than a decade. But it was also a career that never saw the majors.

The Blue Jays selected Beauchamp out of Bacone College in Oklahoma. He was also selected with Toronto hoping he would follow his father, Blue Jays AAA manager Jim Beauchamp, to the majors.

Beauchamp played that first year at rookie-league Medicine Hat. He hit .318 with 48 RBIs. He also made the Pioneer League All-Star team.

He moved to single-A Florence in 1983, then got his first, brief look at AA in 1984 at Knoxville. Beauchamp got his first time at AAA Syracuse in 1986.

With Syracuse, Beauchamp got into 55 games that year, hitting .263. He also hit seven home runs, one of them in a July game at Pawtucket.

Beauchamp, though, returned to Knoxville for 1987, playing 59 games that year. Early in 1988, he moved to the Braves system, playing at AA Greenville. He played 1989 at AAA Richmond, moving to the Giants system for 1990.

He returned for two more seasons in 1993 and 1994, essentially ending his playing career.

Beauchamp then began his coaching career, serving as hitting coach at AA Harrisburg in 1995. He got his first manager's job in 1998, at independent New Jersey. He then went through managing at Lincoln, Adirondack and Bangor.

In 2008, with the independent Wichita Wingnuts, Beauchamp was hit with a four-game suspension for a tirade that included showing the umpire his armpit.

"I regret it, I really do," Beauchamp told The Associated Press afterward. "I don't regret getting ejected and I don't regret trying to fire up my team, but I think I went too far, there's no doubt about it."

"We've got to prepare these players to make the Major League level, the organizational level," Beauchamp told The Independent Mail. "If a player goes from this organization and walks on a Major League field 10 minutes before the game with headphones on, they're going to be called into the office and released immediately. That doesn't fly in a minor league system."