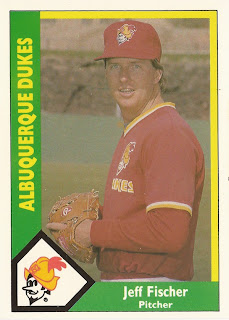 Jeff Fischer just wanted to go five good innings to help his Florida Gators to the 1984 conference championship, he told The Gainesville Sun.

He helped his team to the championship and he did so by pitching a complete game.

"Man, I really felt good," Fischer told The Sun after the win. "I'd had an up-and-down year, and I just wanted to make sure tonight was on an up."

Fischer finished out his college career the next season, before being selected by the Expos in the seventh round of the draft.

He went on to make it up to the majors twice, over two seasons. But his stay up in the bigs both times was brief, Fisher's major league career ending up consisting of all of six outings.

Fischer started his professional career playing in his hometown, at single-A West Palm Beach, There, Fischer went 6-5, in 13 starts, with a 3.51 ERA.

Fisher told The South Florida Sun-Sentinel that August it was another "up and down" year for him. He spoke after a 2-1, complete-game win over Fort Lauderdale.

"It's been like consistent ping pong all year," Fischer told The Sun-Sentinel. "One good game, then a bad game. It was just my good night tonight. I am trying to break the habit."

Fischer hit AA Jacksonville in 1986, getting 11 starts there. He made AAA Indianapolis, then Montreal in 1987.

Fischer debuted with the Expos in June. He got two starts and two relief appearances. In 13.2 innings of work, Fischer gave up 13 earned runs and picked up a loss.

The call-up came in the middle of a bad stretch for Fischer at AAA, The Sun-Sentinel wrote.

"I was back in Indy before I knew it," Fischer told The Sun-Sentinel. "You can't pitch well in the big leagues if you're not pitching well in Triple-A. I did not have it together, and it showed."

At Albuquerque that year, Fischer went 12-10, earning a call up to the Dodgers in September. With Los Angeles, Fischer got into two games, both in relief. He gave up five earned runs in 3.1 innings of work.

Going into 1990, though, Fischer had surgery on his shoulder, The Palm Beach Post wrote. He pitched in only eight more games, three at Albuquerque and five at single-A Vero Beach, ending his career.

Fischer went on to several years in the minors as a coach, including with West Palm Beach in 1995 and 1996.