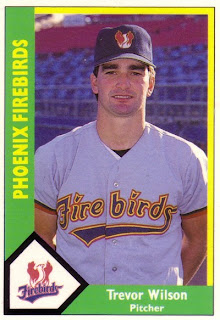 Trevor Wilson thought he got a little too big for his britches, he admitted to The Houston Chronicle in June 1990.

He'd resisted changes to his throwing motion, after control problems on the mound. But he finally relented. The result: A complete-game, one-hitter in his fourth big-league outing of the year.

"I started realizing maybe I didn't know everything and that's when I started taking things in," Wilson told The Chronicle. "I let down my guard and realized these guys have been around a long time and they know a lot more than I do."

Wilson was in his third season with time in the majors in 1990. He went on a career that saw time in eight.

Wilson's career began in 1985, taken by the Giants in the eighth round of the draft, out of Oregon State University.

He played that first year at short-season Everett, going 2-4 in 17 outings. Wilson made AA Shreveport in 1988, then AAA Phoenix that same year. Wilson also made major league San Francisco in September.

When he got back to San Francisco in 1990, with that altered delivery, Wilson started having success.

On June 13, he threw his complete-game, one-hitter, beating the Padres. In that game, Wilson took a no-hitter into the ninth, before giving up that one single. In early August, Wilson threw a two-hitter.

"I'm out there to win a job," Wilson told UPI after the June no-hit bid. "It's up to us young guys right now to carry our load and help the club out."

"It was nice winning the game," Wilson told The Associated Press after that July contest, "but it was a lot nicer with the home run."

That 1992 outing, though, wasn't so notable for the number of hits Wilson gave up, but for how it ended. It ended on three-consecutive Wilson strikeouts, each on three consecutive pitches.

"He was awesome in the ninth," the Astros' Jeff Bagwell told The AP of Wilson's performance. "Three strikeouts on nine pitches. Wow!"

Wilson closed out his major league career with 15 final outings in 1998, with the Angels. His career then ended in 1999, with the Yankees at AAA Columbus.

Wilson has gone on to a post-playing career as a coach in the minors, first with the Giants and, more recently, with the Angels.

In 2003, as pitching coach for the short-season Salem-Keizer Volcanoes, Wilson told The San Francisco Chronicle his philosophy on coaching young pitchers.