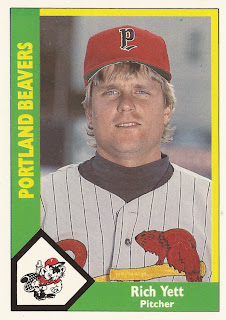 Rich Yett saw himself getting the ball to the outside part of the plate better.

That came after moving to the middle of the pitching rubber, UPI wrote in August 1988, and a trip to the minors that came partially due to injury.

"Being down there and getting hit around and then getting the call back up, reminded me they still had faith in me," Yett told UPI after his third-straight win since his return. "So, I just wanted to go out and prove I can pitch up here. I made a few adjustments and everything's really taking care of itself right now."

Yett was in his fourth season with time in the majors in 1988. His return, though, lasted just parts of two more seasons.

By the time he reached AAA Portland with the Twins in May 1990, Yett's big league career was over, having worked 414 big league innings, posting a career ERA of just under 5.

Yett's career began in 1980, taken by the Twins in the 26th round of the draft, out of Lugo High in Chino, Ca. He played that first year in rookie ball at Elizabethton. He made AA Orlando in 1983, then AAA Toledo in 1984.

Yett spent two seasons at Toledo, going 12-9 his first year and 9-11 his second. Yett picked up one of his wins in 1984, going seven innings while giving up just two hits. In June, Yett got a lead in one game and held it with a strong performance.

"That was the big thing," Yett told The Toledo Blade afterward of the lead. "I've been getting my pitches over, especially my slider, and I haven't been walking many. That, plus the fact that the guys have been scoring a lot of runs for me lately, has been making things pretty easy."

Yett did get one trip to Minnesota, in April 1985. He got into one game, recording one out and giving up one earned run. He didn't make the majors for any extended time, though, until 1986, after a trade to the Indians. Yett was the player to be named in the five-player deal that sent Bert Blyleven to the Twins.

Yett got into 39 games for the Indians in 1986, three of them starts. He posted an ERA of 5.15. In May, he gave up the game-winning hit, coming into a ninth-inning jam. The bases were loaded.

In September, though, Yett got a start, and took it to a complete-game, four-hit, shutout. He also worked in a new split-finger fastball.

"I think it was the big key," Yett told The Associated Press of the new pitch. "I started throwing it in the fourth and got about five, six outs with it."

His 1989 season was the only season in which Yett did not see time in the minors. He went 5-6, with a 5.00 ERA in a mix of starting and relief outings. In May, he told The AP that a little wildness wasn't so bad.

"When I throw strikes, I get hit," Yett told The AP after a six-inning outing where he gave up three hits. "When I'm a little wild, maybe the hitters don't know what to expect."