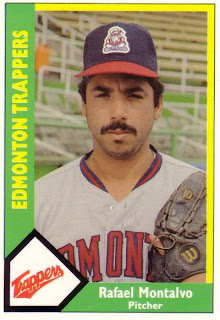 Already three seasons removed from his only major league appearance, Rafael Montalvo still worked to get back that spring in 1989.

Signing with a new team that year, Montalvo thought he might have a shot.

"I wasn't going anywhere with the Astros," Montalvo told The Associated Press after a two-inning, one-hit spring training performance with the Indians. "All I ask is a chance to pitch."

Montalvo's first chance to pitch came in April 1986, an all-too-brief chance that lasted just one inning. But, in a playing career that lasted more than two decades, Montalvo never did get another.

Montalvo's career began in 1980, signed by the Dodgers as an amateur free agent out of his native Puerto Rico. He played his first two seasons in rookie ball, at Lethbridge.

Montalvo made single-A Lodi in 1982, then single-A Vero Beach the next season. At Vero Beach, Montalvo posted a 1.55 ERA in 43 relief appearances. He also earned his first trip to AA, then AAA in 1984.

A mid-season trade in 1985 send Montalvo to the Astros system, Montalvo playing the season between AAA Albuquerque and Tucson.

It was in 1986 that Montalvo got his only look at the majors. That came on April 13, against the Braves at the Astrodome.

In the top of the eighth, Montalvo replaced teammate Alan Ashby. He got two flyball outs, gave up a triple then ended the inning with a groundout. Montalvo opened the ninth with two walks, then was pulled. That first walk, though, came around to score.

By the time that walk scored, though, Montalvo's major league career was already over. His career totals: 1 inning pitched, 1 earned run.

Montalvo played the rest of the season at AAA Tucson, where he posted a 3.86 ERA in 47 appearances. Montalvo stayed at Tucson for three full seasons, though 1988, never getting back to Houston.

After signing with the Indians for 1989, Montalvo never saw Cleveland, or the Cleveland system. He returned to the minors for two more seasons, with the Angels in 1990 and 1991.

Montalvo's last time in affiliated ball came in 1995, serving out the season with 49 appearances back at Albuquerque.

Montalvo's playing career, though, didn't end until 2002. Outside of affiliated ball, Montalvo pitched 22 seasons in the Puerto Rican Winter League, pitching against the major leaguers he never could face in the actual majors, The Middletown Times Herald Record wrote.

Montalvo went on to a career as a coach in the minors with Tampa Bay, including two stints with short-season Hudson Valley.

At the start of his first stint with Hudson Valley, Montalvo told The Times Herald Record his philosophy on playing, and playing so long in the winter league back home.