Greg Biagini passed away in 2003. In January 2012, The Greatest 21 Days talked with his longtime wife, Vickie Biagini, read the two-part interview: Vickie Biagini, Loved It 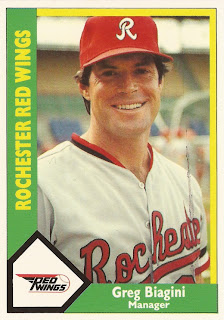 Going over the names of his new coaches, Orioles manager Johnny Oates described one, Greg Biagini, simply as "a young guy who has paid his dues," The Baltimore Sun wrote.

Biagini was just happy to be there.

"I'm elated," Biagini told The Sun. "It's been a long nine years down there."

But, with the Orioles in 1992, Biagini made the majors as a hitting coach.

Biagini's career in baseball began in 1973, taken by the Expos in the 12th round out of Iowa State University.

He played that first year between short-season Jamestown and single-A West Palm Beach. He reached AA Quebec in 1974, then got his only looks at AAA in 1978 and 1979 with the Mariners. Late in his final season, 1979, Biagini hit three singles in one game.

By 1983, Biagini was serving as manager at rookie Bluefield. He spent two seasons there, moving to Hagerstown, then Charlotte. He made AAA Rochester in 1989, spending three seasons there.

In his first year at AAA Rochester, Biagini found himself defending his young infielder Juan Bell against talk after a trade that he was difficult to work with.

"All that crap that was written about him after the trade just isn't true," Biagini told The Los Angeles Times that May. "I haven't seen one sign of that. He's really a good kid."

Moving up to Baltimore in 1992, Biagini ended up spending three seasons in the majors as the Orioles' big league hitting coach.

In 1992, Biagini worked with Randy Milligan, getting him out of a mid-season slump.

"There were some little mechanical things that needed adjusting," Biagini told The Sun. "He definitely came to a point where he had to make a change to do the things he's capable of doing. Once you get on a roll, it just builds from there."

By 1994, Biagini was even getting mentioned on big league managerial lists, at least a long list of possible managers with the Red Sox, The Sun wrote.

Biagini did return to managing for 1995, but to the minors. He served that year as manager at AAA Oklahoma City in the Rangers system. He served there through 1999. Biagini then went on to become an advance scout with the Red Sox in 2001.