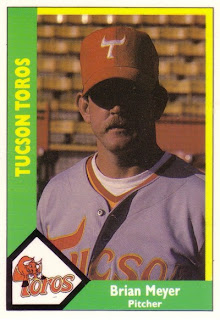 Brian Meyer tried to throw sliders, and throw them down, he told The Associated Press after that September 1990 game. It was a tie game and Meyer thought the double play was a possibility.

A home run was a possibility, too.

"I figured they were going to let him swing away," Meyer told The AP, "but then I threw a slider that just hung over the plate."

Meyer took the loss, one of four he picked up in just 14 appearances on the year. But he did post an ERA of 2.21 in 20.1 innings, the final innings of his three-season big league career.

Meyer's career began in 1986, taken by the Astros in the 16th round of the draft, out of Rollins College.

Meyer picked up another 25 saves in 1988 at AA Columbus. That year Meyer also earned a jump all the way to Houston, as a September call-up.

In his debut, Meyer closed-out a 10-1 Houston win, with a perfect inning of work, and picking up a strikeout. In eight total outings, 12.1 innings, Meyer gave up two earned runs.

Meyer got that one last look at the majors in 1990, again as a September call-up. He went 0-4, with that 2.21 ERA and his second and final major league save.

Meyer played just one more season in the minors, at AAA with the Indians and the Mariners, posting a 2.97 ERA, with 15 final saves.

Going into 1991, though, Meyer was still with the Astros. After the Astros designated him again for Tucson, Meyer moved on. While the Astros didn't work out, Meyer thought a different organization would get him back to the majors.