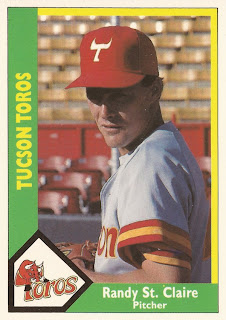 "The hit I don't really care about," St. Claire told The Associated Press after the game. "Getting that first win is great."

St. Claire was in his second season with time in the majors. The reliever went on to pitch in parts of nine major league seasons, getting into a total of 162 games. He also picked up 11 more wins.

St. Claire's career began in 1978, signed by the Expos as an amateur free agent. The son of former major leaguer Ebba St. Claire, Randy St. Claire started the next year at rookie Calgary and short-season Jamestown.

He debuted with Calgary July 31, pitching well, but taking the loss. "St. Claire looked good in his first game," Calgary GM Bill Cutler told The Calgary Herald. He went 1-2 in six starts there.

St. Claire stayed in single-A through 1983, spending that final year at West Palm Beach. There, the starter fully turned reliever, getting into 42 games, with a 2.11 ERA. He also picked up 11 saves.

After making AA Jacksonville for the first time in 1984, St. Claire also made AAA Indianapolis, then, by September, major league Montreal.

For the Expos that September, St. Claire got into four games, giving up four earned runs in eight innings of work. He returned in 1985 for another 42 games, posting an ERA of 3.93. He got that first win in June, first of four.

Going into 1986, St. Claire thought he had done well enough the year before to make the club out of spring training. Instead, he started it back at Indianapolis. He told The Ottawa Citizen he would ask for a trade. "I proved I could pitch last year," St. Claire told The Citizen.

St. Claire returned to the majors in 1991, with the Braves. St. Claire got into 19 games, posting an ERA of 4.08. Going into 1992, it was back to the minors for St. Claire. St. Claire told The Associated Press he knew the demotion was coming.

"I saw the writing on the wall," St. Claire told The AP. "I was expecting it, but it's still frustrating."

St. Claire returned to Atlanta for 10 games that year. He then had two final major league appearances in 1994, with the Blue Jays. His final time as a player came the next year, at AAA with the Pirates in 1995, back where his career began, at Calgary.

St. Claire has gone on to a long career as a coach, in both the minors, and, since 2003, in the majors. St. Claire became the Expos pitching coach that year, staying with the organization in the same capacity through 2009.

"This is nice," St. Claire told The AP after joining the Marlins in spring 2010. "We have a lot of power arms — big, strong, tall kids who can really get the ball up there. They’ve got some talent. We’ll see if I can help them improve on their consistency." 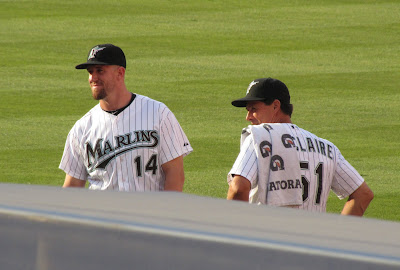