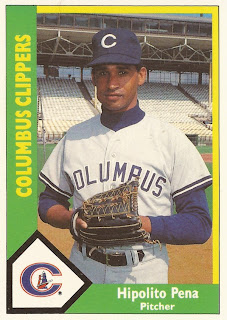 Hipolito Pena wasn't nervous for his first major league appearance, he told The Pittsburgh Press after that September 1986 game.

He'd pitched in front of big crowds in his native Dominican Republic, and in spring training. He'd also gotten some advice from the Pirates' minor league pitching coach, Spin Williams, he told The Press.

"Spin Williams told me," Pena told The Press, "minor leagues, big leagues, it's all the same."

For Pena, though, it wasn't exactly the same. Called up from AA Nashua, where he posted a 3.55 ERA on the season. In the majors, Pena gave up eight earned runs in 8.1 innings.

His big league career lasted just two more seasons, 16 appearances each. Pena, though, continued pitching in the minors and independent ball through 1996, his 14th season as a pro.

Pena's career began in 1981, signed by the Brewers as a free agent, out of his native Dominican Republic. He played that first year at rookie Butte, his second at rookie Pikeville.

Pena didn't make AA until that year in 1986, the one where he first made the majors. At Nashua, Pena got into 31 games, 12 of them starts. In his third start in early July, Pena worked five innings, giving up no runs before being lifted for a pinch-hitter.

After his September call-up in 1986, Pena returned for 16 more outings in 1987. He gave up 13 earned runs in 25.2 innings of work. Pena returned in late July, after being sent back to AAA earlier in the year. The Pirates hoped he would do better upon his return.

"We told him he had underestimated his fastball and thrown too many palmballs," Pirates GM Syd Thrift told The Pittsburgh Post-Gazette. "We sent him back down there to correct that, and he did."

Pena pitched his final major league games in 1988 with the Yankees, traded there at the close of spring training. In his 16 games in the Bronx, Pena gave up five earned runs in 14.1 innings of work.