My blog streak is ending. I wasn't able to get a new post for this evening ready, though I should have known to work ahead.

But Hurricane Irene hit, knocking power out to a whole lot of folks, including us. It's out at home, but still on at work, which is how I'm writing this. But my wife expected me home four hours ago and I'm tired. So I think I'll put things on hold until power gets back at home. Hopefully that's sooner, rather than later.

Until then, enjoy this aptly themed feature posted in May 2010: 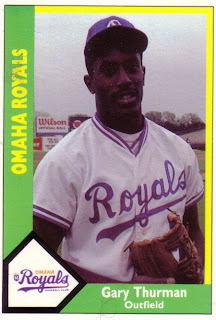 The Fort Myers Royals' path to the Florida State League championship in 1985 stalled out in St. Petersburg. It stalled for four days, as the single-A team holed up in a hotel room as a hurricane passed them by.

"Man, I don't care if I ever see St. Petersburg or another piece of pizza again," Fort Myers outfielder Gary Thurman told The Evening Independent of the hotel stay. "We didn't have anything to do but sleep and eat.

"We pooled all of our money together so we could eat," Thurman told the paper. "Then we ate enough pizza to last a lifetime."

While Thurman likely has had pizza since, he never did return to St. Petersburg as a player. By 1986, he was on to AA Memphis and AAA Omaha. By 1987, it was Kansas City.

If he's returned it's likely been as the Indians' current outfield and baserunning coordinator, on a road trip with the big club to Tampa Bay.

Thurman was selected by the Royals in the first round of the 1983 draft, scouted by Art Stewart. Speaking in 1985, Stewart was satisfied with the Royal's choice.

"He's really coming," Stewart told the Lawrence Journal-World, adding later, "He's going to be something. He's made for our ballpark."

Thurman went on to play parts of nine seasons in the majors, playing with the Royals through 1992. The next year marked his last significant time in the majors, playing 75 games with Detroit. He played 13 more with the Mariners in 1995, then 11 with the Mets in 1997 and Thurman's major league days were done. He hung on one more year in the minors and his pro time was done.

Since retiring as a player, Thurman has worked as manager, coach or coordinator in various organizations. But his time in Seattle seemingly left an impression. spending several years in the Mariners organization, including three years as manager with the Wisconsin Timber Rattlers and 2007 as the Mariners first base coach in Seattle.