How many CMC set members in this picture?

Quick quiz: How many CMC set members do you think are in this picture?

I know, going into Wednesday night's game between the Lowell Spinners and the Aberdeen Ironbirds at Lowell's LeLacheur Park, I would have said two, as well.

There are actually three: One at the far end of the dugout, one among the players on the rail and the third far off to the right coaching third.

And I was fortunate enough to interview all of them, one of the three actually mentioning that the third guy was there.

In all, I got to sit down with Aberdeen's manager Leo Gomez, Lowell's pitching coach Paul Abbott and Red Sox minor league hitting coordinator Vic Rodriguez.

The origins of the trip to Lowell trace back a few weeks, when both visited my local team, the Tri-City Valley Cats. In both cases, interviews didn't work out here. But, looking at the schedule, I saw both converging in a mid-week series at Lowell this week. 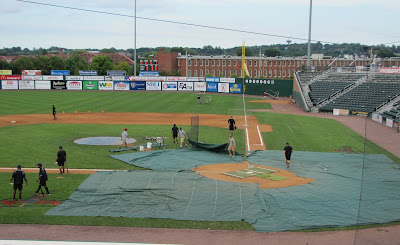 It was perfect, except that it was mid-week. My wife couldn't get the day off from work, meaning we couldn't add Lowell to the list of parks we've been to (currently 17 majors, 23 minors). It also just means we'll get there in the future, which isn't so bad because the park is a nice one.

But it was Rodriguez whom I didn't realize was there, and Abbott who pointed him out to me.

That came after I handed Abbott his CMC card to sign. I always feel weird doing that, even before reading Hank Davis' Small-Town Heroes. Early on in Davis' research, he recalled asking a former major leaguer during an interview to autograph a program. He recalled the mood changing, he'd crossed the line between journalist and fan.

Last year, I even brought along an extra Jim Pankovits 1988 Topps card to get a question from Night Owl concerning the picture answered. Pankovits was great and answered it. Then, when I had him sign the CMC card, he asked if I wanted him to sign the Topps card. I declined, the CMC card was more than enough. One of Paul Abbott's pitchers, Luis Diaz, works in the third inning.

I figure since this blog is so intertwined with this particular set of cards, that I'm talking to these players simply because they're in the set, that it makes a nice visual for the post to see that card signed.

I explain that to them, and the players have been great and autographed their CMC cards.

Well, Paul Abbott went a step further. He looked at his card, seeing that it showed him with the AAA Portland Beavers, mentioned the hitting coordinator at the park Wednesday was also on that team. He mentioned the name, Vic Rodriguez, and I instantly recognized him as a CMC set member.

Did Abbott think Rodriguez had a few minutes to be interviewed, as well? Yes, he thought so.

I'd borrowed my wife's iPhone for the day, and quickly went through a crash 10-second interview prep, trying to refresh my memory on Rodriguez as a player. I think it worked out, though with more time to prep, I'm sure it would have been even better. (I just read now that his son is a Red Sox scout, something I didn't get to ask him about.)

Still, it was really cool to catch him at all. And he agreed to allow me to mail him his CMC card for him to sign and return.