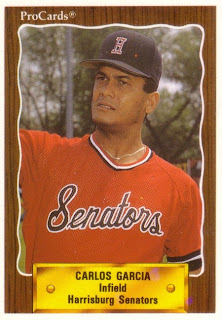 Nearing the end of a career that saw time in 10 major league seasons, Carlos Garcia just found himself trying to stay ready to play, he told The Los Angeles Times.

He couldn't see it any other way.

"Every time I come to the ball park, I expect to play," Garcia told The Times. "If I get to the clubhouse and don't see my name in the lineup, at least I was ready."

He has since gone on to a post-playing career as a coach in the majors and manager in the minors.

Garcia's career began in 1987, signed by the Pirates out of his native Venezuela. He made AA Harrisburg in 1989. He then made AAA Buffalo and then Pittsburgh in 1990.

With the Pirates that year, Garcia debuted in late September. He got into four games, with four at bats, getting two hits. He returned for another 12 games in 1991, then 22 in 1992.

For 1993, the Pirates felt Garcia was ready to be an everyday player. They felt he was ready in 1992, but they didn't have room, Pirates GM Ted Simmons told The Washington Observer-Reporter in November 1992.

"Carlos earned the right to play at the major league level and play every day," Simmons told The Observer-Reporter. "We perceive him as a top-notch who can contribute both offensively and defensively, so we had to make room for him."

Garcia repaid that faith by hitting .269 with 12 home runs in 141 games in 1993. He also got a few Rookie of the Year votes, coming in ninth in the balloting.

Going into 1994, Garcia was being looked at for big things. The Associated Press wrote that Garcia might have the makings of being a top Pittsburgh second baseman. Garcia, though, wasn't sure.

"I have my first year behind me and that's out of the way and I don't have to prove myself anymore," Garcia told The AP in March. "Sometimes I don't know if that's good or if that's bad."

Garcia went on to have another good year, hitting .277, with six home runs. He also made the All-Star team.

"Early in the season I was thinking too much," Garcia told reporters during that streak. "Now I just go along with the pitch. I'm just seeing the ball good."

His season with the Blue Jays was his last full one in the majors. His average dropped to .220. He signed with the Angels for 1998, getting into just 19 games, then the Padres for a final six in 1999.

Garcia played at AAA with the Yankees through 2001, ending his playing career. By 2005, Garcia was back in the majors, coaching with the Mariners. By 2010, he was in the same post with the Pirates.

For 2011, Garcia is serving as manager for the high-A Bradenton Marauders in the Florida State League. In July, he was praising his pitching staff to The Pittsburgh Post-Gazette.