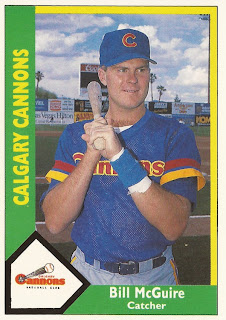 The Mariners already up 2-1, Bill McGuire came to bat in the sixth against starter Bud Black.

With two men on, McGuire sent a Black pitch deep to left-center, for a home run, one that would prove the difference in the Mariners' 6-3 win, June 11, 1989.

"It wasn't the best pitch I've ever thrown," Black told The Associated Press later of the one to McGuire. "When a guy only has a few big league at bats, you don't know a whole lot about him. You haven't faced him enough to know his weaknesses."

By then, McGuire did only have a few major league at bats, it was his 13th major league game. He would also have only a few more, that home run ending up to be McGuire's only one in the majors.

McGuire's career began in 1985, taken by the Mariners in the first round out of the University of Nebraska. At Nebraska, The catcher was a finalist for the U.S. Olympic team, before being placed in reserve in late June.

His professional career started at single-A Wausau, hitting .246 with three home runs. For 1986, McGuire moved to single-A Salinas, hitting .299 with six home runs. One of his Salinas home runs was another three-run shot.

McGuire spent 1987 at AA Chattanooga, hitting .228. For 1989, he started back in AA, at Vermont. In 49 games there, he hit .206 with five home runs. One of those home runs resulted in three runs in the season-opener against Glens Falls.

Moved up to AAA Calgary, McGuire hit .231 in 37 games. He also debuted with Seattle in August. He got into nine games for the Mariners that year, getting three hits in 16 at bats.

McGuire played spring 1989 with the Mariners, taking part in a brawl late in the spring. He started the year back at Calgary, but was called up to Seattle in June and September, totaling 14 more games.

In those games, McGuire hit his home run and got four other hits in 28 at bats. One of the other hits came June 6, helping the Mariners to a run.