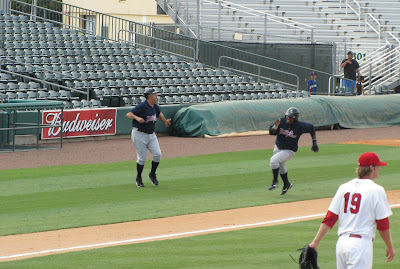 My wife and I arrived for the Palm Beach Cardinals game a little late.

It wasn't a big deal. The previous evening, the Saturday night May 14 game, had been rained out, making Sunday a double header, the first contest starting a few hours earlier.

We were on vacation, and we wouldn't be able to stay for the conclusion of the second game. We had to get up early the next morning for the space shuttle launch. But, I figured, half of the first game and half of the second make for one complete game watched.

Once we got inside, though, it seemed other people were running late, too. Either that or they just didn't get the info about the early first game. At any rate, they should start showing up by the advertised regular start time of 7 p.m.

That time came and went and the crowd was still sparse, for Sunday night baseball. 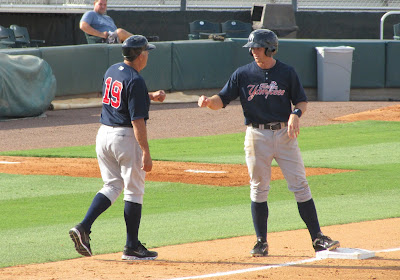 Tampa manager Luis Sojo congratulates Robert Lyerly at third. Lyerly knocked in two runs with a double earlier in the fifth inning May 15, 2011 at Palm Beach.

But this crowd just seemed small. The next night was even smaller.

After seeing the shuttle lift off, we made our way back down to Jupiter and stopped off at St. Lucie. The Mets' team was in town, playing Brevard County. With a capacity of 7,347, only 401 showed up. Granted, it was a Monday night, but still.

I do realize that any standard minor league crowd could look small with so many empty seats. 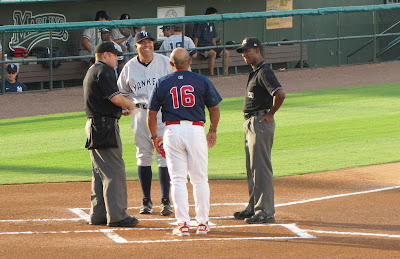 Tampa manager Luis Sojo shares a laugh with Palm Beach skipper Luis Aguayo before Game 2 of a double header May 15, 2011.

So I just looked up the average attendance and, of course, both these games appeared to be out of the norm for the league, as far as attendance goes.

The Florid State League has a list of the averages and, while Palm Beach is on the low end, second from the worst in the league, they do average larger crowds, just not that large. So far, in 29 openings, they average 989. They got more than 1,900 through the gates June 4.

Jupiter is fourth worst, with an average of 1,278. I would guess the averages are kept down because, with two teams playing on one field, there's a game almost every night there. 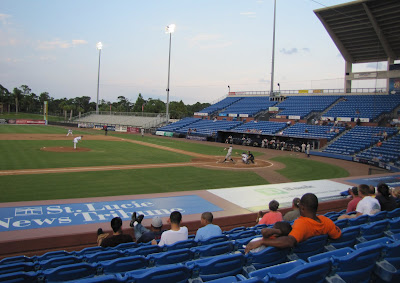 St. Lucie's numbers the night we were there, I'm sure, were affected by it being a Monday night. They're actually averaging just over 2,100 per game.

So, anyway, that's what struck me about the two Florida State League games we got to. Both stadiums were fine parks, but you might expect that being that they're spring training facilities. But it was weird seeing baseball played under palm trees.

As far as CMC set members go, there was one at one of the games. Tampa manager Luis Sojo was a member of the 1990 Syracuse Chiefs, before going on to a lengthy career in the majors.
Posted by Steve78 at 1:00 PM