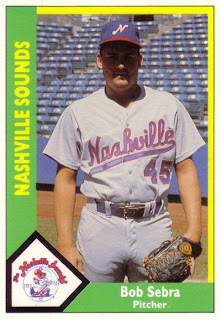 Having just been traded to the Brewers earlier that month, Bob Sebra's stint in Milwaukee had not gone well.

Sebra gave up 10 earned runs in 11 innings. Paying for it, though, was Tracy Jones.

"I drilled him; I hit him on purpose," Sebra told The Associated Press after starting a bench-clearing brawl that June 30. "Things haven't been going right for me or the team lately. It was time for someone to take a lump. I wasn't trying to hit him in the head but I was trying to drill him."

For his honesty, and hitting a batter on purpose, Sebra was suspended five games. He was also sent back to the minors, to serve his suspension upon his return. He played professionally through 1993, including a stint in independent ball in 1998, but Sebra never served that suspension.

Sebra's career began in 1983, taken by the Rangers in the fifth round out of the University of Nebraska. Sebra made AA Tulsa his second year, going 10-5 and earning a promotion to AAA Oklahoma City.

In his third year, Sebra debuted in the majors. In four starts and seven appearances in 1985, Sebra went 0-2, with a 7.52 ERA. That November, the Rangers traded Sebra and another player to the Expos for Pete Incaviglia.

"If Bob can keep it together for spring training, he might be the guy we're looking for," Expos manager Buck Rodgers told UPI after the shutout. "This is exactly what we are looking for on this team, someone to come in and take a job."

On July 1, though, Sebra was stellar. And he picked up a loss. He struck out 14 while giving up three hits. He lost 1-0 on a ninth-inning home run.

"That was the best pitched game I've ever seen anybody lose," Rodgers told The AP after the game. "I don't know how you can pitch better than that."

Going into 1988, Sebra was no lock to return to the Expos staff. Sebra told The Palm Beach Post he wasn't worried about anybody but himself. If he pitched well, he'd be in the majors. Pitching coach Larry Bearnarth told The Post Sebra needed to show consistency.

Sebra pitched well that year, but in AAA. He even made the AAA All-Star game, something he wasn't particularly thrilled about.

"It's an honor to be on the team, for one thing," Sebra made clear to The AP. "On the other hand, in my situation, I don't feel like I should have been here long enough to make the team."

He didn't return to the majors until September, by then traded to the Phillies. He got three starts, allowing 10 runs in 11.1 innings, going 1-2.

Sebra's frustrations mounted. In spring 1989, after learning he would be sent to AAA, he threatened to retire, The Philadelphia Daily News wrote. He went to AAA, though. He returned to Philadelphia long enough for five starts, before being shipped to the Reds in July.

Sebra moved to the Brewers in June 1990, getting his final big league playing time, the end coming sooner with that pitch to Jones.