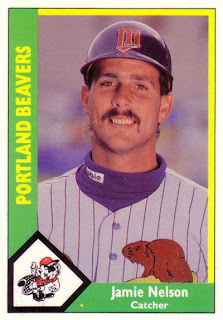 Selected away from the team that had brought him to the majors, Jamie Nelson was optimistic that he would get back to the bigs with his new team, the Brewers, The Milwaukee Journal wrote.

But he'd have to go back to the minors to get his shot at returning to the majors.

"It's always a shock when you get sent down," Nelson told The Journal as spring closed in 1984. "But I think it's good for me to get to stay in this organization. I think that will turn out to be good for me."

But his one lengthy stint with the Mariners that year before, in 1983, would be the extent of Nelson's big league career.

While going on to a playing career that wouldn't fully end until spring 1995, injuries and expectations would conspire to prevent Nelson from making that return trip to the bigs.

But his career in baseball continues into 2011, serving as a longtime coach and coordinator in the Rays system.

Nelson's career began in 1978, taken by the Mets in the 8th round of the January draft. He played three years in the Mets system, before signing with the Mariners for 1981. He played that year and the next at AA Lynn, then 1983 at AAA Salt Lake City.

Speaking to The Los Angeles Times in 1986, Nelson recalled his time in the majors. He remembered the food that, after one game, included a spread of turkey and dressing.

"I couldn't believe it. After a game down in A or Double-A, you get yourself a microwave burrito at 7-11 and you're happy as a lark," Nelson told The Times. "I said, 'God, no wonder everybody talks about getting here.' "

Nelson spoke to The Times while trying to get back, playing in American Legion ball. The catcher had blown out his arm early the previous season.

He returned to affiliated ball in 1987, in the Royals system. With the Royals system, Nelson got in line for another call-up when Jamie Quirk got injured. But Nelson missed that opportunity after getting injured himself in a home plate collision, according to The Associated Press.

After spending time with the Yankees and Angels systems, Nelson landed with the Twins at AAA Portland in 1990. By that time, the catcher had spent 12 years in minors, minus a year out on injury. The veteran Nelson served as a backup catcher to teammate and prospect Derek Parks.

Sports Illustrated noted comparisons between Nelson and the character Crash Davis, of Bull Durham. Crash Davis was the player big league clubs wanted him to be. But it wasn't the player Nelson wanted to be. It was his last season in affiliated ball.

"The last thing I wanted to do was play Crash Davis and go from Triple A to AA," he told SI. "That's not exactly a progression."

Nelson returned in 1994 playing independent ball as a player/coach for the Mobile Baysharks of the Texas-Louisiana League, for his final playing year.

Nelson even left baseball briefly, for a janitor's job. Then the Royals came calling again, this time for replacement ball in spring 1995. Nelson hoped his play might restart his career.

"I think the more I'm around here, the more I get to display my skills and talents to show them I can still play," Nelson told The AP that February. "It's a million to one odds that they will want to retain me."

Nelson did return to the field after the spring, just as a coach and manager in the Rays organization. These days, he's one of eight roving coordinators for the Rays.

In 2007, Nelson served as manager of rookie-league Princeton, with the veteran player trying to get his team through a rough spot.