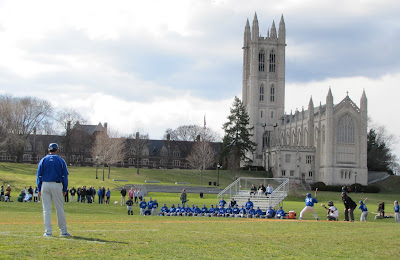 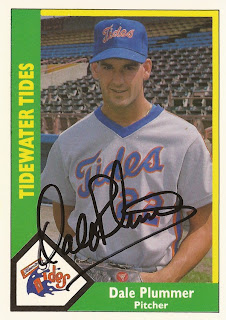 Colby had just had a tough day at Hartford, Conn.'s Trinity College, losing by a score of 19-8.

"The good thing about this," Plummer quoted himself as telling his players, "is we get to go home, take a shower, get a good meal and then come back and do it again tomorrow."

While the Colby College Mules could count on coming back to do it again, there was once a time in Plummer's life when tomorrow was far from a certainty.

Before his college coaching career, Plummer played seven years in the minor leagues, for the Mets and the Red Sox. But, in 1992, in the middle of his fifth season, third with time at AAA, Plummer felt a pain in his midsection.

That pain, turned out to be cancer.

He had gone from being a pitcher on the brink of making the major leagues, to a cancer patient, unsure of what would happen.

But he made it back, eventually signing with his childhood team, the Boston Red Sox. He went from not being able to run between two telephone poles, to being told by his manager he'd gotten called up to the major leagues. But call-up came with the realization that he couldn't go - an injury meant he couldn't pitch.

He also couldn't realize his childhood dream of playing for the Boston Red Sox.

"It's going to be with me for the rest of my life, it really is," Plummer told The Greatest 21 Days. "I try to make the best of it. The game's a tough game. I had the baseball rug pulled out from underneath my feet more than once." 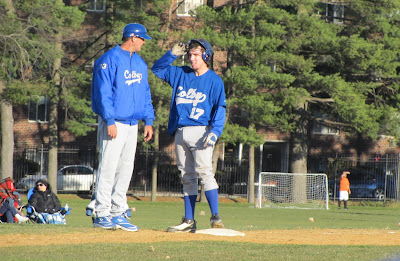 Plummer spoke with The Greatest 21 Days after the loss to Trinity College, at the Colby bench. A native of Maine, Plummer first signed on with Colby in 2006 as an assistant.

He became head coach the following year and is now in his fifth season navigating the Mules through the New England Small College Athletic Conference.

Plummer brings with him the seven years he played in the minors, getting paid to play the game. The college game of the NESCAC, Plummer said, is little different from the pro game.

Plummer's competition as a professional began in 1988, selected by the Mets in the 23rd round, out of the University of Maine. He moved up to AA Jackson in his second season, and AAA Tidewater his third.

But he couldn't crack the Mets pitching staff. He stayed at Tidewater for 1991 and 1992. In 1992, the reliever picked up four wins, with an ERA of 3.57. Plummer even recalled hearing talk that he might get called up. 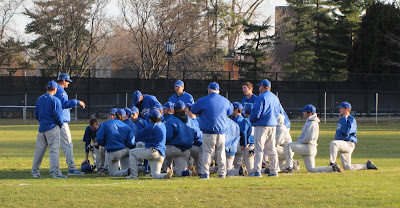 Dale Plummer, second from the left, speaks with his players after Colby College's loss to Trinity

Then came the cancer, testicular cancer. Worries about a spot on a big league roster gave way to other, more pressing, worries. Like, would he survive?

"I had a lot of faith in God," Plummer said of that time. "When you find out something like that, there's nothing you can do, so I just gave it up to Him. Because there was nothing I could do.

"Life was on hold for a while, until we got through the treatments."

Plummer got through the treatments. But the treatments took their toll. He recalled trying to run between telephone poles. He couldn't even do that.

Those telephone poles, he recalled, became the benchmark for his come back.

"It was tough," Plummer recalled. "It was really tough to come back. But I worked every day. I made sure I went at least one more telephone pole every day. That was my goal."

Then, for 1995, the strike year, his favorite team as a child, the Red Sox came calling to sign him, and then to bring him up to the majors.