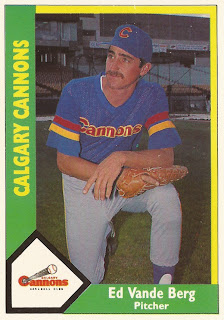 In 17 of the Mariners' first 32 games of 1982, Ed Vande Berg was called to the mound. It would be a big workload and and a big confidence boost to any pitcher.

For Vande Berg, he was just happy to be there. These were the first 17 appearances of his major league career.

"It's amazing," Vande Berg told The Spokane Spokesman-Review, "Did I think I'd be here now? Heck no, they took a chance just signing me."

Vande Berg was in just his third professional season, signed by the Mariners in the 13th round of the 1980 draft, out of Arizona State University.

He would make that quick ascent to the majors, ultimately getting into a total of 78 games for the Mariners in 1982, the most appearances by any pitcher in the American League.

Vande Berg would also go on to a career that would span seven major league seasons, continue in the minors through 1992 and make a brief return for spring 1995 as a replacement player.

Vande Berg played his first professional season in 1980 at short-season Bellingham. The starter went 9-0, with an ERA of 2.85. With that record, Vande Berg earned a promotion for 1981, all the way to AAA Spokane.

At Spokane, Vande Berg shifted from starting to relief. He got into 49 games, getting nine saves. With Spokane that June, Vande Berg told The Spokesman-Review his theory on coming into a game in his new role in short relief.

"You've got to act like you've been in there the whole game," Vande Berg told The Spokesman-Review. "I start psyching up when the game starts."

Once he got to the majors, Vande Berg did a lot of that acting. After topping the league in appearances his rookie year, Vande Berg came in second two of the next three seasons, with 68 and 76 appearances respectively.

That rookie season in 1982, Vande Berg posted an ERA of 2.37 in a total of 76 innings. He also earned five saves. It was enough for him to show up in the Rookie of the Year balloting, coming in fourth.

He did about as well in 1983, with a 3.36 ERA and another five saves. But he also faced some confidence problems, he told The Associated Press in early August. That confidence was helped in a crucial strikeout of Reggie Jackson.

"He was going to have to hit my pitch," Vande Berg told The AP, "and that was a breaking ball."

Jackson didn't hit it, and struck out.

Vande Berg stayed with the Mariners through 1985, then he was traded that December to the Dodgers for Steve Yeager.

With the Dodgers, Vande Berg got into another 60 games, with an ERA of 3.41. After going through Cleveland in 1987, Vande Berg landed with the Rangers for 1988, his final season in the majors.

"I'm not a save man and I've never been a save man," Vande Berg told reporters after the August game. "I came close a few times last year but it's been a long while. Tonight was my 400th career appearance so that meant something special too."