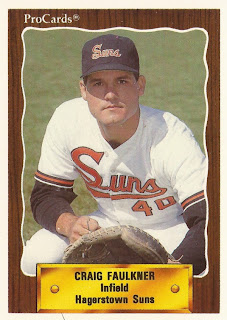 Going into his third professional season in 1989, Craig Faulkner found himself invited to Orioles spring training, according to The Sarasota Herald-Tribune.

He got the invitation in the form of a letter that off-season.

"It's nice," Faulker told The Herald-Tribune in late February. "I didn't really expect to go to big league camp, but I was pleased when I got the letter. Being near my home is all that much better, because I can sleep in my own bed, eat my own food."

Faulker didn't make the Orioles that year, or any year, his career ending in 1994 after eight seasons. But Faulkner is still close to home. But, instead of playing, he's coaching.

Faulkner has served as the head baseball coach at Venice High School in Venice, Fla., since 1999, winning a state championship in the meantime. It's the same school that Faulkner attended as a youth.

Signed by the Orioles in 1987 out of Louisiana State, Faulker played his first season at short-season Batavia. He hit .273 with 16 home runs. He moved up to single-A Hagerstown for 1988, hitting .283 with 12 home runs. He hit one of those home runs in a late June game.

After that spring in 1989, Faulkner stayed at Hagerstown, but moved up with the club to AA. But his average dropped, to .204. The catcher did get a three-game look at AAA Rochester.

He got his first and only extended look at AAA in 1994, back with the Orioles at Rochester. He also got his first look at snow, on an April road trip to Ottawa, according to The Baltimore Sun. Faulkner played 36 games for Rochester that year, his last as a player.

By 1995, Faulkner was coaching, named the first base coach for AA Bowie with the Orioles. Of his decision to move to coaching that year, Faulkner told The Herald-Tribune he simply "ran out of talent.

"My first pro manager always told us if you didn't make it to the big leagues make sure it was because you ran out of talent, not because you didn't work hard enough," Faulkner told The Herald-Tribune that May. "I feel that was my situation, so I'm not walking away with any bitterness or regrets."

His first year back at Venice was in 1999. By 2010, he'd won seven district titles. He also won the state championship in 2007. He was trying to get his team back there for 2010, using the motto "Restore Respect," according to The Venice Sun.

"The last couple of years we fell short of getting out of the district," Faulkner told The Venice Sun after taking the district championship. "We want to restore respect to Venice High School baseball. There has only been about three years in my past 14 years coaching that we haven’t got into regionals. Not just in winning games but just doing all the little things it takes. What a great step for us."
1990 CMC TallyCards Featured: 434/880 - 49.3%
Players/Coaches Featured: 442Made the Majors: 299 - 68%
Never Made the Majors:143-32%-X
5+ Seasons in the Majors: 124
10+ Seasons in the Minors: 110
Posted by Steve78 at 10:20 PM