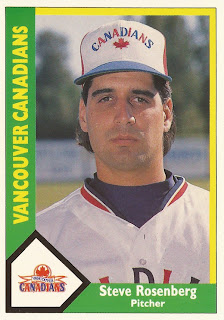 The talk was that Steve Rosenberg might make the Padres rotation in May 1991 and Rosenberg was excited about it, according to The Los Angeles Times. He knew he could do it, he'd done it before.

"But to be honest about it," Rosenberg told The Times, "I've got a little mixed emotions becuase I've been doing a good job in the bullpen.

"Besides," he added to The Times, "I remember what happened in Chicago."

What happened in Chicago wasn't good. In 1989, Rosenberg started the year as a reliever, then moved into the rotation by May. By the end of he year, he was 4-13 with an ERA just under 5. He got back to Chicago in 1990, but for only six games, all in relief.

His season with the Padres in 1991 would be the last of four seasons in the majors for Rosenberg, his career cut short by a shoulder injury.

Rosenberg's career began in 1986, taken by the Yankees in the fourth round. He played at short-season Oneonta and single-A Fort Lauderdale that year, then hit AA Albany and AAA Columbus in 1987.

In November 1987, the Yankees sent Rosenberg to the White Sox in a five-player deal. He started 1988 at AAA Vancouver, getting his first call-up to Chicago that June. Rosenberg got into a total of 33 games for the White Sox in 1988, all in relief. He posted an ERA of 4.30. It was a continuation of a pitching career that, until that point, had been entirely in relief.

His season in 1989 began in relief, as well. Then, in May, the White Sox put him in the rotation, replacing Jerry Reuss.

"I know it's a change, but it isn't something that can't be handled," Rosenberg told reporters after the switch. "The big difference is, when you're in the bullpen, you never know when you have to be ready, and you know you're not going to pitch more than two innings."

By mid-June, Rosenberg was still 2-2. His first victory as a starter, came in early June, going 6.1 innings and giving up three runs. "It's a 'W,' " Rosenberg told The Chicago Tribune. "It is still a new role to me, but I'm adjusting."

He got into just six games for the White Sox in 1990, then was traded that next off-season to the Padres. Though he was considered for a starting spot with the Padres, he never got a start. He got into 10 games, all in relief. Then he was traded again, to the Mets.

He never pitched for the Mets, in the majors or in the minors. He was soon diagnosed with a torn left labrum, according to The South Florida Sun-Sentinel. Rosenberg worked to get back.

"You don't realize what you have until something is taken away from you," Rosenberg told The Sun-Sentinel. "It makes you think about your future. It's been an eye opener. Picking up the ball for the first time, I had some doubts. Once you've had surgery, you never figure to play again."

He played six more games, with the Mariners at high-A Riverside, in 1993, ending his career. He has gone on to a post-baseball career, that has included a job with Merrill Lynch, and a pitching coach job at his old high school, Coral Springs Christian Academy in Florida.