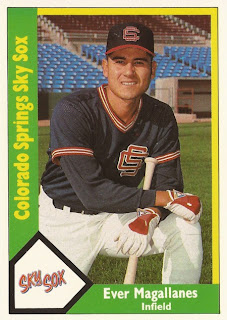 Eduardo Escobar has the energy and passion to play baseball at the highest levels, Ever Magallanes, who managed Escobar at AA Birmingham, told MLB.com in November 2010.

"Everywhere he's gone, he's hit .270," Magallanes told MLB.com. "He's got the power to go along with that. I can't say enough about him. I definitely think he's a Major Leaguer."

Magallanes spoke as a former major leaguer himself. He was a major leaguer for all of three games in May 1991, part of a playing career that spanned well over a decade in the minors and his native country of Mexico.

Magallanes has since gone on to a career as a manager and instructor in the minors, named for 2011 the White Sox' infield instructor.

Magallanes' playing days began in 1987, taken by the Indians in the 10th round of the draft, out of Texas A&M.

Magallanes and his brother, fellow player and manager Bobby Magallanes grew up in Southern California, after their family moved there from Mexico, according to The Birmingham News.

He played his first two seasons at single-A Kinston, hitting .244, then .263. He moved up to AA Canton in 1989, then seeing time at AAA Colorado Springs that same season. Between them, he hit .274.

It was AAA Colorado Springs full time in 1990, with the infielder hitting .308 for the Sky Sox.

Then, in 1991, Magallanes got his call. Starting back at AAA Colorado Springs, Magallanes debuted with Cleveland on May 17. His final major league game came five days later, on May 22.

In that time, Magallanes got to the plate three times, taking one walk, striking out once and popping foul to left in his final outing.

After that, Magallanes returned to Colorado Springs. For 1992, he signed with the White Sox, playing at AAA Vancouver. He ended his affiliated career with two seasons in the Rangers system, never getting the call to Texas.

But his playing days weren't done. He is credited with playing in Mexico through 2005, including a brief stretch at AAA Tucson in 2004.

He turned to managing in the minors in 2006, taking the reins of the Arizona Angels, then the Cedar Rapids Kernels in 2007.

For 2009, Magallanes moved to the White Sox system, managing at AA Birmingham. That summer, Magallanes was selected to manage in the Futures Game, then the Southern League All-Star Game.

"I am incredibly honored," Magallanes told OurSportsCentral after being named to both posts. "It doesn't happen every day that you're able to coach in the Futures Game and then come back the next night and be the manager in an All-Star Game. I have been blessed."