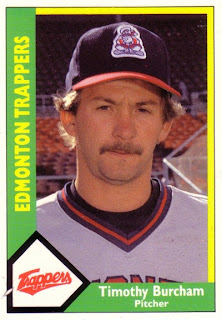 The spring was nearing a close and, for Tim Burcham, it wouldn't come soon enough.

"Always about this time you get a little anxious," Burcham told The San Francisco Chronicle. "It gets long and monotonous and you want it to count. I'd like it (spring training) to be 2-3 weeks, then get going."

Burcham had been in springs before. But not like this one. Burcham was nearing the end, having just been named the Giants' opening day starter. But he never got that start. This was spring 1995 and Burcham was a replacement player.

He also never made the majors.

Burcham's career began, taken in the sixth round of the 1985 draft by the Angels, out of the University of Virginia.

The Angels selected Burcham after a season at Virginia that saw him go 11-2 with a 1.83 ERA by late May, according to The South Florida Sun-Sentinel.

"(Burcham) kept us off balance all day. He has a great curveball," University of Florida first baseman Mike Stanley told The Sun-Sentinel. "He had us looking for the curveball, then he'd slip the fastball past us. We knew he was a good pitcher, and he proved it."

Speaking to his hometown Newport News Daily Press, Burcham said he expecting to head back to Edmonton that season. There were too many pitchers ahead of him.

"It gets a little frustrating sometimes,'' Burcham told The Daily News. "I see a lot of these guys who I played with and against, and they're in the big leagues. All I want is a chance to see whether or not I can do it."

By spring 1995, Burcham was taking classes at Arizona State when the Giants came calling, according to The San Francisco Examiner. The strike over, Burcham played five games at AAA for the Giants at Phoenix. He also spent time in 1996 at independent Palm Springs in the Western League.