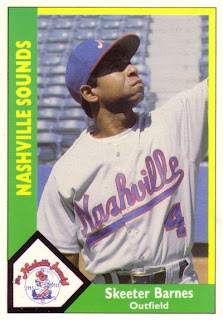 In his 14 years, Skeeter Barnes had seen big league time in five seasons. But, in the previous five years, he'd only seen playing time in a total of nine major league games.

That soon changed, Barnes told The Associated Press, after a plane ride and a dream he had.

"We were on a flight and I fell asleep," Barnes told The AP. "I dreamed everything coming together. I visualized being called up to the major leagues."

After that, he went on a tear. Soon, he was in Detroit, in time to play in 75 games for the Tigers. He hit .289. In those previous and brief big league campaigns, Barnes appeared in 75 games combined.

Barnes would also play in each of the next three seasons, earning a permanent spot at Tiger Stadium over the next two.

In August 1984, however, Barnes hit a walk-off home run. In the bottom of the 12th, Barnes put one over the left field fence to beat the Astros. The week before, Barnes tied the game in the ninth and broke up a double play that led to the game-winner in the 11th.

"I just want to plant seeds in people's minds that I can play this game," Barnes told The AP after the earlier game.

Over the next five seasons, Barnes played nine games in the majors. He spent the rest of the time at AAA with seven organizations, Montreal, Philadelphia, Milwaukee, St. Louis, Pittsburgh, Cincinnati and finally Detroit.

One of this two call-ups in that time came in May 1987, with St. Louis. He played in four games and got four at bats. In one of those at bats, Barnes hit a three-run home run to help the Cardinals over the Padres.

He returned to the majors with those 75 games in 1991. His first two hits after getting called up were home runs. In 1992, he played in 95, hitting .273. He also hit another three-run home run in an August game.

Tigers Manager Sparky Anderson liked having Barnes, The AP wrote in September 1992. He could play almost any position. From third base that July, Barnes took part in a triple play.

"This is a good club for me," Barnes told The AP. "Sparky's not afraid to give an older guy a chance. I don't have all the talent in the world. But he doesn't ask you to give you more than you've got."

Barnes returned to the Tigers for 84 games in 1993 and 24 more in 1994, finally ending his career. Barnes' career, however, has continued as a coach, manager and coordinator in the Tigers, Brewers and Rays systems.

Barnes was an instructor in the Rays system in 2007 when he worked with 5-foot, 8-inch Michael Ross.

"I just want to go to the major leagues," Ross told The Bluefield Daily Telegraph that July. "I need to do all the little things.