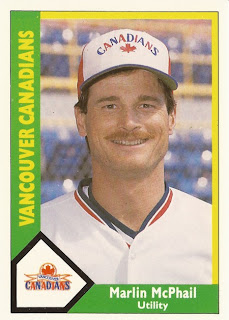 Marlin McPhail always saw his path to the majors was through being as useful as he could be. He was a utility player, he could play almost any position.

But, in a career that spanned a decade, McPhail got as high as AAA, but no higher.

"I got myself into a position where I could have been called up by the White Sox," McPhail told The Hartford Courant in 1993, two years after playing his last game. "[The White Sox] didn't go that way, but at least I worked myself into that position. I was happy with my career."

McPhail spoke to The Courant that year having already started his post-playing career. McPhail was in his second year coaching in the Mets system. He has gone on to a long career as a scout, scouting top Met picks.

McPhail's baseball career began in 1982, when he was signed out of Cornell by the team he would later scout for. He played that season at rookie league Kingsport and short-season Little Falls.

McPhail, a native of New London, Conn., started working on his versatility from the start, The New London Day wrote in February 1983. He told The Day he felt he could handle left field, right field, third base, second base or catcher.

"Maybe that's the way I can fit in with this organization," McPhail told The Day. "If I could make it as a utility player, help the club and advance, I'd be very happy."

McPhail played that year at single-A Lynchburg and single-A Columbia, hitting .302 between them. He returned to Lynchburg for 1984, but got a 30-game look at AA Jackson.

That spring, it was Jackson that was McPhail's goal. And to fit in wherever he could.

"If they said left field was my permanent position, I'd take it, but I'm not trying to force it," McPhail told The Day in March 1984. "That's foolish. That's the surest way for them to say get in a car and drive north, and not to a baseball club."

McPhail got his first look at AAA in 1985, 10 games at Tidewater, a promotion helped because he could come off the bench, The Day wrote. He returned to Tidewater in 1986, his last with the Mets system as a player.

By 1987, he was with the White Sox system, back at AA, at Birmingham. He returned to AAA, at Vancouver in 1988, his first of three seasons there. One more season, at AAA Indianapolis with the Expos, and McPhail's playing days were done.

But his baseball career continued.

"I got as close as I could with three different teams," McPhail told The Day in December 1992, "and in doing so I made some good connections."

McPhail has spent many of the years since as a scout for the Mets, signing a series of players. McPhail scouted the Mets' 2010 top pick, seventh overall, Matt Harvey.